The Swinging Blue Jeans seventh U.S. single was the January 1967 issue of the November 1966 U.K. single "Rumors, Gossip Words Untrue" b/w "Now The Summer's Gone". It would be their next to last U.S. single, followed by September's "Something's Coming Along".

"Rumors, Gossip, Words Untrue" was first issued by New Jersey's own Knickerbockers in October 1966 on the flip of "Love Is A Bird" (Challenge 59341).  I must confess to preferring The Knickerbockers version as the vocals are far superior and the guitars have a cool raga feel where the Blue Jeans version is more bubble gum. Regardless the Blue Jeans version is still interesting as well as it doesn't deviate much from the original. 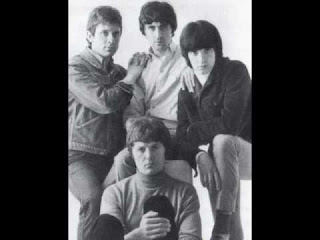 The band original "Now The Summer's Gone" reminds me a bit of The Association meets Gary Lewis & The Playboys with it's mid tempo melody, harmonies and light, laid back feel. It works, but only just barely.

Both sides have been compiled on the British "At Abbey Road" CD and the now out of print American "Hippy Hippy Shake: Definitive Collection"  CD.