By 1968 David Bowie was a man without a label, being unceremoniously dumped by Deram after just three singles and his debut long player (two singles and one long player in the US).  Luckily by 1969 he was signed by Phillips/ Mercury and set about recording what would be his very first U.K. hit "Space Oddity" (his tenth 7" in five years of recording). First issued in Britain on July, 11, 1969 (as Phillips BF 1801) it would die a death and not chart until being relaunched again in September where it eventually clawed its way up to the very respectable #5 .  When issued in the U.S. in July it stalled at the dismal #124.  Bowie was backed by Junior's Eye's guitarist Mick Wayne, bassist Herbie Flowers, drummer Terry Cox and Rick Wakeman on Mellotron.  Bowie himself contributed the Stylophone, a small battery powered keyboard played with a stylus. It was his fourth U.S. 7" preceded by "Can't Help Thinking About Me" (Warner Brothers 5815, May 1966), "Rubber Band" (Deram 45-85009, June 1967) and "Love You Till Tuesday" (Deram 45-85016, September 1967). 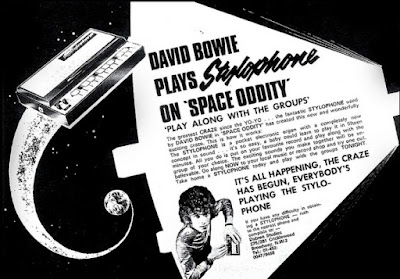 The U.S. version was edited to 3:26 and differs from the U.K. issue with slight differences, especially in length as the British 45 is 4:23 long. What's most noticeable is the guitar solo punches in faster on the US mix doing away with some of the effects leading to it and the number quickly fades out after the solo with the ending descending guitar bits sweeping in much earlier than on the full length mix. I like it because it's rather different and because at times I find the original goes on a bit much.

The flip side, "The Wide Eyed Boy From Freecloud" was also whittled down considerably from it's original 4:51 down to 3:20. Not one of my favorites but still worth a listen. 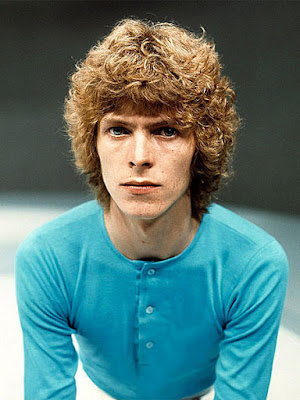 The US version of "Space Oddity" was not reissued until a collection was put out for the track's 40th anniversary featuring not only the US 45 mix but a host of other versions, isolated backing tracks etc. The shortened version of  "The Wide Eyed Boy From Freecloud" cropped up on the 1989 Bowie box set "Sound + Vision".