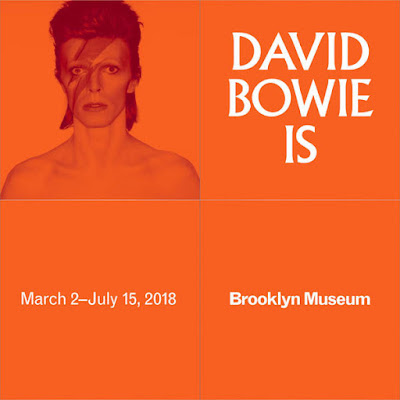 In 2013 when "Mojo" magazine announced a David Bowie exhibition at the V&A in London I was peeved as usual that Britons always get to see cool things we Americans don't. Ten cities later the exhibit is at it's final destination in Brooklyn, New York at the Brooklyn Museum as "David Bowie Is" which runs until July 15th of this year. The exhibit became sort of a traveling memorial with Bowie's untimely passing and will probably be the last time anyone gets to see so many of his things up close.

Unlike the Rolling Stone's "Exhibitionism"  I avoided reading articles on "David Bowie Is" and since cameras were not permitted I didn't have to worry about too many friends posting pics on social media.  I wanted to be completely unaware of what the exhibit had to offer even though I had a few ideas before I made my trip to Brooklyn (which literally felt like driving to Minnesota) .

The exhibit starts with a small bedroom with a bed flanked by blow up photos of David in his first band The Konrads and The King Bees and adorned with his original plastic Grafton saxophone (as seen in shots of his first band the Konrads and later resurrected for the back cover shots of "Pin Ups") and his Ziggy era Harptone 12 string (not, sadly the Framus 12 string that features in pics from '65-'66).  Admittedly there is not a lot of my beloved 60's period on display (even the vinyl from the 60's on display are repressings or in the case of one of the Pye singles, a mock up!). There's loads of photos, sheet music for Davie Jones & The King Bees "Liza Jane" and the holy grail of the exhibit for me, the charts for "The London Boys" that Bowie and bassist Dek Fearnley wrote out for session musicians to play in the 1966 session for probably one of my favorite Bowie tracks (complete with corrections by the classically trained session men!). Quite literally almost every article of clothing you've seen Bowie perform in or photographed in from the Ziggy era to his final tour are on display. From the Ziggy kimono to the insane corrugated metal dress he wore on "Saturday Night Live" (complete with the appearance on a TV screen below the item, my first time watching it in over 40 years since S.N.L. vigorously removes content posted to YouTube), to his tuxedo and hat from the 1975 Grammy awards to his white shirt and black vest and trousers from "The Thin White Duke" period to the Freddie Burretti designed suit from Mick Rock's "Life On Mars"promo film (it's actually light blue not green as the video leads you to believe!) to Natasha Korniloff's Pierrot clown suit from the "Ashes To Ashes" video, David Bowie apparently not only never threw anything out but took meticulous care of everything. It's quite astonishing when considering his life of rock n' roll excess through a sizable chunk of the 1970's that he managed to hang onto nearly everything!

But beyond the clothing there are loads of other interesting and unusual items. There's a small alcove where the walls are lined with 7 inch picture sleeves of every UK David Bowie 45, there's a whole wall dedicated to Bowie's 2nd LP "David Bowie" (issued in the US as "Man Of Words Man Of Music") complete with sketches and the final painting by George Underwood that adorned the back cover and a print of a geometric design painting by artist Victor Vasarely which had David's head superimposed on as the front cover.  There's a host of other odd Bowie ephemera such as the keys to his Berlin flat, his map of the Berlin subway system, the test pressing his manager Ken Pitt gave him of the first Velvet Underground album in 1966 , his coke spoon (yes I'm not kidding), loads of sketches, diary entries and even a telegram from label mate Elvis Presley wishing him luck on his 1976 US tour. There is an array of videos playing throughout and the headset provided is activated when you pass certain parts of the exhibit.

At an astonishingly affordable price of $20 its certainly worth seeing. Geographical considerations made it impossible for me to get there on a weekday so my Saturday afternoon visit was mobbed to the point that I'm considering going back on a weekday so that I can take in everything I missed! Tickets are still available  through the link above.

So glad that I got to see it.