More U.K. Obscurities On U.S. Labels: The Ivy League "My World Fell Down"


My introduction to Britain's squeaky clean harmony trio The Ivy League came not via one of their many UK hits but from this semi obscure 45 that they cut in 1966 which was included on Bam Caruso's Rubble series on 1988's "Volume 7: Pictures In The Sky". It would be their last US release, issued in December 1966 (the UK version on Piccadilly 7N 35348 was previously issued in October). "My World Fell Down" was also covered by the US group Sagittarius and released as a single in the US in May 1967 (Columbia 4-44163) and the UK in August 1967 (CBS 2867) featured on the famous 1972 US 60's garage compilation "Nuggets".

"My World Fell Down" is easily the best cut The Ivy League ever came up with.  Written by John Carter with fellow tune smith Geoff Stephens it's aided in no small part due to the somber strings care of producer Terry Kennedy.  The orchestration and the band's brilliant harmonies weaving in and out of the sawing strings are nothing short of brilliant! It has a certain bleakness to it only matched by, say, The Move with "Blackberry Way". 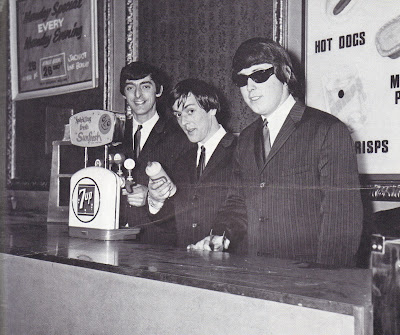 The flip side, "When You're Young" is dreadful because of the children's backing vocals (the British release credits read  "accomp. by The Children's Choir Dr. Barnardo's Barkingside" (Dr. Barnardo's is a charity organization in Britain charged with the aid and care of orphans and foster children. David Bowie's father, Haywood Jones was a PR man for Dr. Barnardo's interestingly). They're like fingernails on a chalk board and not at all groovy like the kids of Keith West's "Excerpts From A Teenage Opera".

As mentioned frequently in our other Ivy League posts both sides are available on a variety of Ivy League compilation CD's. As their material is owned by Castle Communications they've been licensed to death.

Hear "My World Fell Down":

Hear "When You're Young":

I find it sad that you describe those little children’s voices as fingers down a chalkboard!! One of those little girls was my mum!! She was in the children’s home as her mother had fled a violent abusive father!! They lived in fear of him coming to ‘find them’ the children endured further abuse within the home and had to put up with .......... (no comment)...............from the young men in the Ivy League !! So ironic they had to sing the words to that song, as every thing wasn’t lovely ‘when you’re young’ the kids who sang in the grocer jack (excerpts from a teenage opera) wher from an acting school, ( the comado Accadomy I do believe!!) Ok, I get it’s bit the best song in the world, but those little girls backing the vocals all had a sad tale of neglect, and they were only singing how they’d been told too anyway!!!