More U.K. Obscurities On U.S. Labels: The Bonzos US Debut

The infamous Bonzo Dog (Doo-Dah) Band's debut American 45 was a release of their smash UK hit (#5!) "I'm The Urban Spaceman" (UK Liberty LBF15144, October 1968) . It was issued here in December of 1968.  Produced by Paul McCartney famously using the pseudonym of "Apollo C. Vermouth" and written by band member Neil Innes (better known to Americans as Ron Nasty in "The Rutles") it failed to trouble the US charts, which didn't stop Imperial from issuing an LP titled "Urban Spaceman" (essentially their "The Doughnut In Granny's Greenhouse" LP give or take a few tracks)! The band's connection with the Beatles went back to McCartney's brother Mike recommending them for the Fab's "Magical Mystery Tour" (in which they can be seen vamping "Death Cab For Cutie" in a strip club).

For those not acquainted with "I'm The Urban Spaceman", the Bonzo's most famous tune, it's a light hearted little number that's not readily comparable to anything else. Led by some pan flute, tuba and ukulele it's probably one of the more bizarre pop songs of the 60's. My fave is the solo featuring a "Doo Dah Horn" (a horn mouthpiece placed on a garden house with a funnel on the end and recorded while oscillating). It's also sung by Neil Innes (most of the band's tracks were usually handled by Vivian Stanshall) which makes it sound quite different from the usual Bonzos fare. 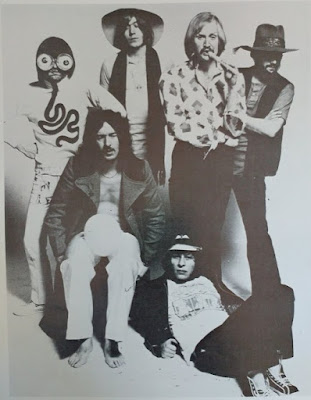 The flip, "Canyons Of Your Mind" is a Vivian Stanshall tour de force. The band had previously already explored tongue and cheek doo-wop type numbers before ("Death Cab For Cutie" in "Magical Mystery Tour" for instance) and it continues here but with typically bizarre lyrics with Stanshall camping it up in an over exaggerated Elvis type voice and an intentionally bad, flubbed guitar solo by Innes.

Both sides can be found in a variety of places. There's an excellent 3 CD collection on Amazon that collects nearly all their material called "Original Album Series" or if you're in line for something slimmer there's a domestic CD featuring both called, simply, "Urban Spaceman".

Here's a clip of the band on British TV's excellent "Colour Me Pop" doing "Canyons Of Your Mind":

Great piece. I wonder what the Americans made of the Bonzos back in those days.