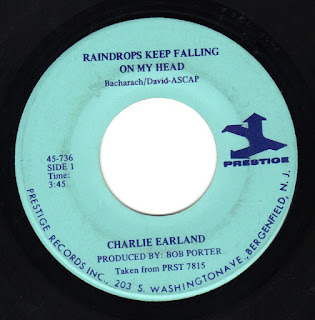 1. CHARLIE EARLAND-"Raindrops Keep Falling On My Head"
One of the interesting and sometimes disparaging things about jazz can be the readings of current pop standards, it's a double edged sword it can cut either way. Philly's champion of the Hammond B-3 Charlie Earland cut this Bacharach/David tune as a single in 1970 and believe it or not it swings in the most marvelous way.

2. KING CURTIS-"Hot Rod"
In Mojo magazine's latest issue they actually had a CD that not only didn't get binned outright or become a coaster (not that I actually would do that) but that I played several times. Among the gems on "15 Floor Fillers" was this groovy but gritty King Curtis B-side from 1961 full of twangy guitar/bass and a solid beat next to some jazzy horn work. 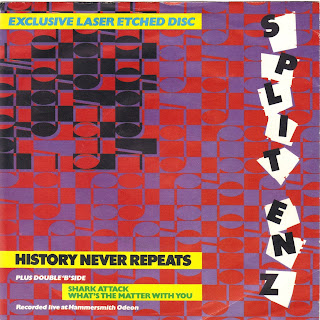 3. SPLIT ENZ-"What's The Matter With You (Live)"
Found on the flip of 1981's "History Never Repeats" is this supercharged and raw version of "What's The Matter With You" culled from a 1980 gig at the Hammersmith Odeon (with The Bodysnatchers, that would've been some gig to see!). It's twice as fast as the studio version and as more of an edge, especially during the guitar/keyboard solo.

4. J.J. JACKSON'S DILEMMA-"Does Anybody Really Know What Time It Is"
Last month's Monkey Picks mentioned this Chicago cover from soul singer J.J Jackson's 1971 LP "J.J. Jackson's Dilemma" and I dug it so much I purchased a copy on Discogs. Retaining the original horn arrangements from the Chicago version with a slightly jazzier swing the real meat of the track is J.J.'s solid vocals, which sounds at times like a fish out of water but still incredibly powerful. 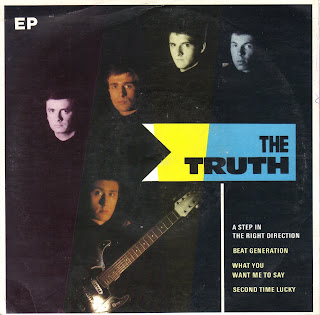 5. THE TRUTH-"The Beat Generation"
Nostalgia for 80's stuff from my past is often few and far between especially from these guys who in retrospect, had a lot of material that came off like Bruce Springsteen meets The Style Council.  The Truth were also victims of the industry, the press and to a smaller degree young mods. All three were looking for the "new Jam" which ensured the Truth were stillborn on arrival. But this little ditty from a 1983 E.P./45 still works for me showing there was still some redeemable  material in their back pages. And hey Dennis Greaves is holding a Burns 12 string on the cover!

6. THE IN-KEEPERS-"It Was Just His Thing"
Someone I follow on Instagram posted a clip of this way out 45 from 1969 and I immediately sought it out. It's full of fuzz guitar, soaring Moody Blues style vocals and kitschy almost apocalyptic voice overs with trippy string arrangements and dig this....it's about Jesus. "Many men have told the tale of how it tried to get the world to sing, he lived and died by the hammer and nail, I guess that was just his thing". Alas the world was not ready for Christian rock yet.

7. THE STEVE MILLER BAND-"Dear Mary"
From their 2nd LP, 1968's "Sailor", "Dear Mary" veers away from the tedious "white boy plays the blues" route some early SMB stuff takes and the result is a beautiful, melodic Beatles meets Brain Wilson ditty sweetened with some regal trumpets and rain sound affects that will have you looking out the window. 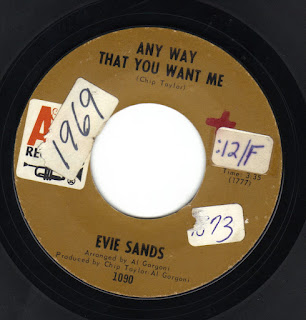 8. EVIE SANDS-"Any Way That You Want Me"
From the pen of Chip Taylor comes a track made famous by The Troggs interpretation in 1966. Songstress Evie Sands cut this soulful and powerful version in 1969 and though it's a tad different than the Trogg's reading it's still worth checking out despite her sudden favor with the latest hipster record dorks who bored with Ronnie Spector, Mary Weiss and Jackie DeShannon have made her their new queen.......

9. THE WALKER BROTHERS-"Orpheus"
This track from the final Walker's 60's LP "Images" is a perfect taste of the dark, bleak but lushly orchestrated scenarios that Scott Walker's solo career would bring. "Orpheus" sees Scott at his most narcissistic and dark of all characters, the real life Lothario that "The Amorous Humphrey Plugg" wished he could be but full of loathing, contempt and over confidence.
"Remember me, I've already forgotten you and make your beds for me for things we ought not to do...drive us all, round the bend" 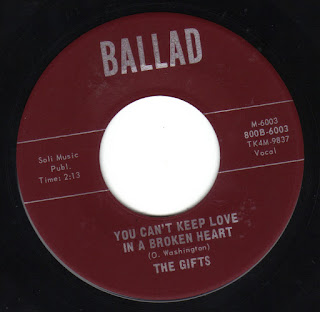 10. THE GIFT'S-"You Can't Keep Love In A Broken Heart"
I ordered a Dusty Springfield 45 from a dealer on E-bay who threw this in as a freebie. I knew nothing about it until I spun it and it's not a bad bit of mid-tempo soul from 1966 on the Ballad label with a strong horn section and a groove not unlike The Radiants. Anyone know anything about them?