Multi-instrumentalist's Sounds Incorporated were a 6 piece British combo who had been around since the early 60's. There first singles were on the Decca label (where they cut a one 45 with the legendary Joe Meek) before moving to Columbia.  Best known to American's as the band behind the brass on The Fab Four's "Good Morning Good Morning", they also opened for the Beatles in a 1965 US tour with an entire set filmed during their opening slot at the legendary Shea Stadium gig in August. In an effort to capitalize on their fame from that tour Liberty records issued the band's latest 45 in both the UK and the US at the same time in October 1965. Issued in the UK as Columbia DB 7737 it remains one of their most sought after 45's.

"I Am Comin' Thru" was previously written and issued by Billy Preston on his legendary 1964 album "The Most Exciting Organ Ever".  I'm rarely one to claim covers are better than the originals but in this instance I am firm in my conviction that the Sounds Inc version easily trumps the Billy Preston version.  It's faster, ballsier and heavier thanks to the bands powerful horn section. Where the original is a soulful slow burner this version is a 100 mph organ/horns party tune, full on. 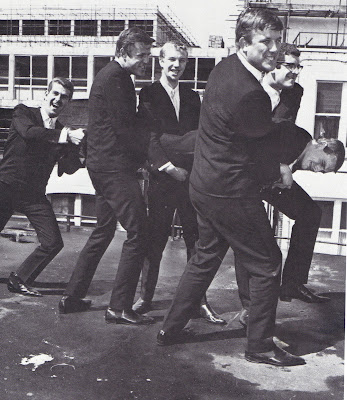 The B-side, "On The Brink", was the debut 45 by Mike Vickers after leaving Manfred Mann and had already been issued by him in the UK in August (on the same label as Sounds Inc nonetheless!). Though lacking the kitschy/frenetic feel of the original this version is still amazing thanks to the bands strong sax playing, hard hitting drumming (care of future session man extraordinaire Tony Newman) and solid instrumental precision.

"I Am Comin' Thru" has been compiled on an untitled See For Miles collection  but "On The Brink" has yet to grace any collections, unfortunately.

Hear "On The Brink":