The Action Is Here! The Action's "Shadows And Reflections" new box set reviewed! 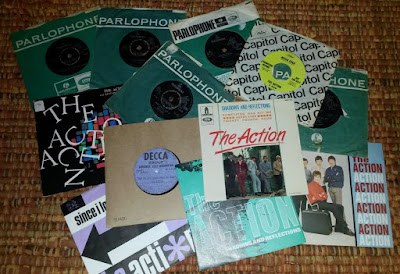 Apart from Monkeypicks  I don't think there's a bigger Action fan in the world like me so when it was announced that there was going to be a four CD set of their entire catalog I freaked. Not since their excellent tome "In The Lap Of The Mods" Action book have I been so excited to see a package arrive at my door!

Rather than give you a blow by blow account of all 86 tracks on this four CD set I figured I would give you some highlights. In 1990 when Edsel issued the very first Action CD all of their EMI recordings the tracks were remixed for some inexplicable reason (their ground breaking 1980 vinyl "Ultimate Action" comp  album on Edsel was taken direct from the masters) . Over the past three decades subsequent CD reissues of the band's EMI catalog (and tracks on various artists CD compilations of the bands EMI recordings) have used the same atrocious mixes.  Grapefruit/Cherry Red's new box set has atoned for that with compiler Alec Palao gaining direct access to EMI's master tapes giving The Action their very first "direct from the original masters" CD compilation ever. Sadly there are no unreleased songs in the EMI archives that we haven't already heard, but that said there are several alternate versions, backing tracks, rehearsal takes and previously unheard Stereo mixes of all of their EMI recordings. Also included are the band's 1967-1968 recordings (previously issued as "Brain/Rolled Gold") including full length versions of "Brain" and a previously unedited version of "Really Doesn't Matter Anymore", all the BBC tracks compiled for Circle's 2004 collection "Uptight And Outtasite", the 5 cuts recorded in '68 after lead singer Reg King's departure and a few months before they became Mighty Baby and issued in 1985 as the "Speak Louder Than" mini LP, both sides of their 1964 single as The Boys and the four tracks issued on 2014's E.P. on Top Sounds. Curiously the dreadful Edsel mixes are consigned, unnecessarily, to disc four.

The real treat for me were the backing tracks, rehearsal takes and alternate mixes. The backing track take of "Shadows And Reflections" sans lead vocals bears an eerie almost Pink Floyd sounding Farfisa playing scales alongside George Martin's harpsichord that's unnoticeable on the standard 45 version. Action members are notoriously dismissive of the band's sound once lead guitarist/backing vocalist Pete Watson left at the end of 1966 and claimed they sounded "thin" without his guitar and backing vocals.  To this I say balderdash and so shall you when you have a gander at the Association like backing vocals weaving their magic on "Shadows.."!! A rehearsal of "Shadows" flip "Something Has Hit Me" sounds positively amazing with Alan "Bam" King's chiming Rickenbacker noticeable with the backing vocals absent and lead singer Reg King's soulful tones are perfectly accented in an alternate take of the Righteous Brother's "Just Once In My Life" that strips away all the backing vocals . A backing track of "The Place" (written by US r&b singer Jack Hammer best known for "Down In The Subway" who was apparently on hand for the session) highlights Watson's chiming 12 string Rickenbacker meshing with King's 6 string Rick minus George Martin's harpsichord as does the backing track for "Come On Come With Me", which stripped of it's vocals shows how Motown-esque the chord/key changes were. A rehearsal take of band original and the first post Pete Watson single "Never Ever" (minus horns and backing vocals) is a beautiful glimpse of the rhythm section of bassist Mike Evans and drummer Roger Powell, especially the later who is on fire on the cut.  And of final note is the rehearsal take of "Something Has Hit Me" with Alan "Bam" King's chiming electric almost Byrdsy guitar making the track far more ballsy than the finished product which instead utilized an acoustic guitar.

There are never before heard Stereo mixes of 15 of the band's 17 EMI recordings that offer a clearer investigation into the vocals (especially the backing vocals which sound higher in the mix to my ears than the mono versions) in addition to the original mixes of all 17 tracks cut with George Martin for EMI.

There's a nice booklet included with liner notes by David Wells, an intro by our favorite "Mojo" scribe Lois Wilson and an annotated run down by Alec Palao of all the recording information for all 86 tracks in chronological order. Palao has also compiled a a vinyl LP titled "New Action" 12 tracks of the band's '65-'67 EMI material direct from the master tapes.
By William - October 29, 2018