More U.K. Obscurities On U.S. Labels: The Roulettes US Debut

Britain's beat quartet The Roulettes are little known in the United States and if they are its only as a minor footnote in backing singer Adam Faith on his sole U.S. "hit" "It's Alright" (Amy 913 October 1964) which reached #31. The band, comprised of Russ Ballad (vocals/guitar), Peter Thorp (lead guitar), John "Mod" Rogan (bass) and Bob Henrit (drums) had previously backed Faith on an early US release ("We Are In Love" Amy 899 February 1964) and today's subject. "Soon You'll Be Leaving Me" was the band's first US release sans Adam Faith. It was issued in May of 1964 (previously issued in the UK in November 1963 on Parlophone R 5072). Interestingly the UK issue featured "Tell Tale Tit" on the flip while the American issue featured "Can You Go" (pinched from the flip of their March 1964 UK 45 "Bad Time", Parlophone R 5110).

"Soon You'll Be Leaving Me" is a storming beat group number starting with a cracking drum intro and some Beatle-esque chord changes and excellent harmonies. The Roulettes always brought their A-game when it came to powerful vocals and tight musicianship and this 45 is no exception. 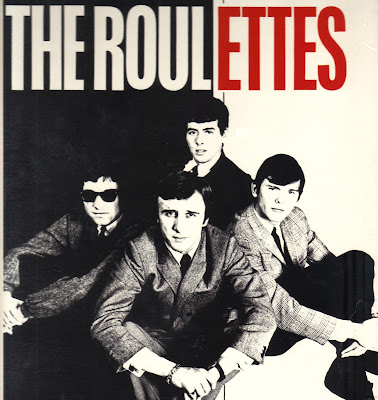 "Can You Go" is not as good as the top side with some hokey lyrics but its still spirited and has a rousing delivery in standard up tempo beat group abandon.  Both sides were penned by songwriter/singer Chris Andrews

The Roulettes would have one more US 45 on their own which you can read about here.

Both sides are available on a now out of print BGO CD reissue of their LP "Stakes And Chips" (which is one of the rarest British 60's albums with copies fetching an excess of $1,000!).

Hear "Soon You'll Be Leaving Me":