The Kink's "Mr Pleasant" was curiously NOT an A-side in the U.K. (though promo copies are known to exist and there is an ongoing debate as to whether they were for export or not). Strangely though it was issued in six European countries and Australia and New Zealand, all bearing "This Is Where I Belong" as the B-side. Issued here in the United States in May 1967 with "Harry Rag" as a B-side it's one of the band's less common releases though not their most difficult US 60's singles to find, that honor belongs to their US debut on Cameo "Long Tall Sally"/"I Took My Baby Home".

"Mr. Pleasant" unsurprisingly did nothing to return the Kinks to the US Top 40 (1966's "Sunny Afternoon" rose to #14, the band's last Top 40 placing until "Lola" in 1970). Like most of their '66-'68 material it was incredibly "too English" in the words of one scribe to make any impact in the U.S. The lyrics are another brilliant Ray Davies exercise in people watching, this time our protagonist is a well to do guy who has everything he could want but his money and popularity mean nothing because he has a cheating wife. It's all very un-1967 style with bar room piano and mild brass farting along giving it a neo-Edwardian feel (session piano player Nicky Hopkins would later cut his own version with whistling instead of singing coming across as an odd companion for Whistling Jack Smith). 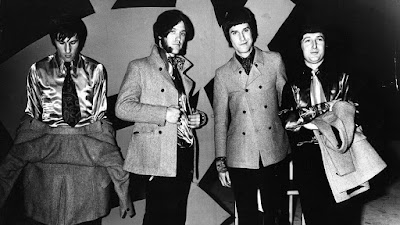 If the A-side was "too English" the flip, "Harry Rag", goes on step further with it's Cockney rhyming slang and mannerisms (rag=fag, "fag" being of course a cigarette in the Cockney vernacular). Delivered on top of a military march beat Ray croons about the joys of a good "Harry Rag" and how all walks of life enjoy a smoke. "Harry Rag" is an interesting choice as a B-side as it was culled from the band's 1967 LP "Something Else By The Kinks" and only appeared in 7" form in the US and Canada.

Both sides are available in a variety of places, our favorite being the two CD deluxe edition of "Something Else By The Kinks".