By the dawning of 1967 The Yardbirds were in grave danger of becoming has-beens in the U.K., their last major British hit was May 1966's "Over Under Sideways Down" which stalled at #10. It's follow up "Happenings Ten Years Time Ago" limped miserably in at #43. New management decided that the band's reliance on group originals was getting them nowhere and a new producer was brought in and a new path needed to be followed. Producer Micky Most had run up a string of successes for Donovan, Herman's Hermits, The Animals et al and was brought in to apply his Midas touch to the Yardbirds. His tenure with the band saw them attempt a far more commercialized/pop sound not unlike previous lead guitarist Jeff Beck's solo foray upon leaving the band (also overseen by Most). The band retained their blues aficionado moniker onstage and on the occasional album track but from now on A-sides would be purely a "pop" affair. Sadly the record buying public thought little of this and the band spent most of their remaining career traversing the United States on tour after tour where the British Invasion was still going strong.

Issued in the US one month earlier than the UK issue "Little Games" appeared in America in March of 1967 where it did nothing in the charts (#51 in the top 100 to be more precise). Despite being the first Yardbirds single to not chart in the UK it is nonetheless leagues above their next three pop fluff thanks to some groovy strings (care of Jimmy Page's future band mate John Paul Jones) interspersed with Page's restrained bursts of guitar which gives it a catchy groove. Curiously the label credits it to one "Wienman"  (it was written by Harold Spiro and Phil Wainman and properly credited on the UK release). 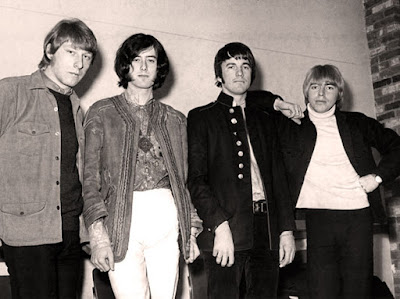 The flip, a Keith Relf original called "Puzzles" is punctuated a nifty dual guitar riff (one of which is a 12 string) that drifts in a trippy little neo-raga haze on the chorus and a way out solo that abruptly fades out like Most got tired of Page's riffing and simply plunged the fader down quickly!

Both sides are available as bonus tracks on a host of CD reissues of the band's 1967 US and Euro only long player "Little Games".

I first heard this song back in 1977 via my brother-in-law's copy. It's still one of my favorite Yardbirds songs.