Brit duo Chad & Jeremy were far more successful in the USA  than back in the homeland , so much so that by 1966 they ceased to release any singles in the UK (and they had but one hit in the UK, "Yesterday's Gone" that peaked at a paltry #37!!).  Today's specimen was their eighth UK 45 (issued in September 1965 as CBS 201814).  It was issued here in the States a few months prior (July to be exact)! Interestingly it reached #35 here in the US Top 40 but I had never heard it before (growing up  US "oldies radio" pretty much stuck to "A Summer Song" and "Willow Weep For Me")!

The A-side is a curious choice , "I Don't Wanna Lose You Baby" was penned by Van McCoy but I can find no evidence of anyone else recording it (but thanks to my pal Larry Grogan over at Funky 16 Corners I have since learned it was originally cut by Tommy Hunt as Atlantic 45-2278 in February 1965). It's an interesting track of orchestrated pop that's somewhere between The Righteous Brothers/The Walker Brothers and The Association (the melody sounds like a cross between "Just Once In My Life" and "(You're My) Soul And Inspiration"). 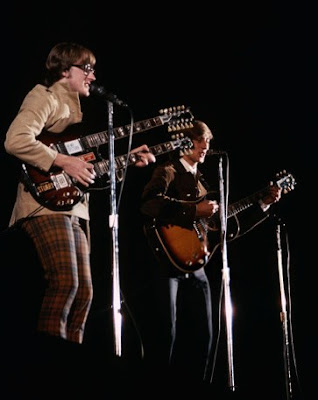 The flip side "Pennies" starts out pretty mundane and the lyrics aren't anything special at first, but it grows on you especially because of the subtle, hypnotic 12 string riff jangling away in the back ground. The song writing credits of "C. Powers" is presumably Chester Powers aka Dino Valenti.

Both sides have been compiled on the Chad & Jeremy collection "The Essential Chad & Jeremy: The Columbia Years".