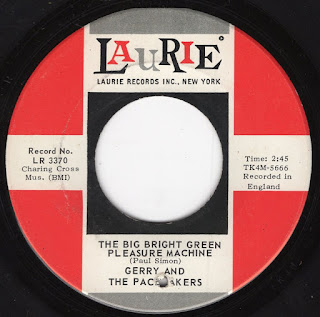 1. GERRY & THE PACEMAKERS-"Big Bright Green Pleasure Machine" US Laurie LR 3370 1966
With their career all but running on fumes Liverpudlian's Gerry & The Pacemakers like most band's of the beat era were trying new things which often meant covering tracks by hip new songwriters. Whereas the original has an almost cynical delivery this version is cheery and perfect for Gerry's "cheeky chappie" persona (that would no doubt aid him in his soon to be discovered cabaret circuit career), but not at all unlistenable with it's buskers style guitar/banjo and bouncy delivery. It was curiously not released in the UK.

2. ACE KEFFORD-"Save The Life Of My Child" Unreleased 1968 recording
Former Move bassist and in house glamour boy Chris "Ace" Kefford set about recording a solo LP upon his departure from the band in '68 that was not released until over two decades later. Kefford's stab at this cut from the "Boookends" album is not much different than the original presentation though more sparse but with some fuzz guitar and a lyric substitute switching the newspapers from New York to the UK ("though it never made the Daily Times in the Sheffield News the caption read...").

3. JUSTIN & KARLSSON-"Somewhere They Can't Find Me" UK Piccadilly 7N 35295 1966
This curiously Scandinavian sounding duo were actually two English gents named David Forey and John Woolsgrove. Their version of this track from the "Sounds Of Silence" album sticks fairly close to the original bar the jazzy electric piano and the vocals lack the harmony of the original but somehow it still works, even just barely. 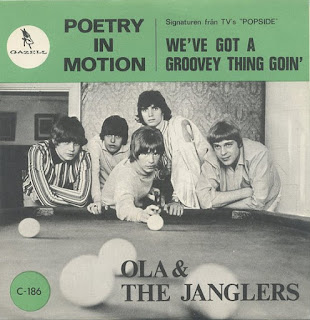 4. OLA & THE JANGLERS-"We Got A Groovy Thing Goin'" Sweden Gazell C-186 1966
Sweden's beat quintet Ola & The Jangler's issued a rocking reading of this "Sounds of Silence" track as the flip of their eighth single (a dreadful cover of "Poetry In Motion").  Driven by some groovy organ, subtle fuzz guitar and a catchy beat it's an excellent reading taking the original's (itself loosely based on "Work Song") feel to new places before abruptly ending as if the producer signaled for them to cease playing.

5. DAVY GRAHAM-"Homeward Bound" LP track UK  "Hat" Decca LK 5011 1969
Paul Simon discovered Davy Graham during his brief UK sojourn in 1966 and covered "Anji" on him and Garfunkel's 1966 "Sounds Of Silence" LP (which was originally miscredited to Bert Jansch on early pressings and using it as the intro to "Somewhere They Can't Find Me" on the same LP). Graham returned the favor by cutting "Homeward Bound" on his fifth Decca LP "Hat". It's a no frills version, just acoustic guitar, mild percussion and vocals but somehow it works in no small part to Graham's string plucking virtuosity.

6. THE FACTOTUMS-"Cloudy" UK Pye 7N 17402 1967
U.K. Harmony vocal quartet The Factotums cut a slew of 45's for the Immediate label before switching to Pye where their fourth release was this track from S&G's "Parsley, Sage, Rosemary & Thyme" LP. It's airy and mellow not unlike their former Immediate label mates Twice As Much, giving it an almost M.O.R. feel that's sadly not terribly interesting.

7. THE HOLLIES-"I Am A Rock" LP track UK "Would You Believe" Parlophone PMC 7008 1966
The Hollies were firmly interested in folky American sounds so it should have come as no surprise when this cover of one of the crown jewels of the "Homeward Bound" LP popped up on their fourth LP "Would You Believe". It's impressive owing of course to the groups built in harmony trio of Clarke, Nash and Hicks (as well as some tasty 12 string harmonics from the latter's trusty battered Harmony guitar). 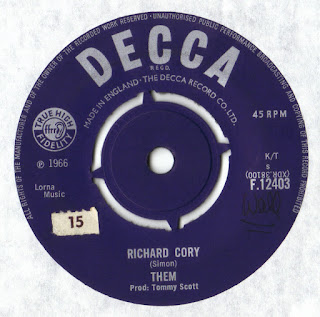 8. THEM-"Richard Cory" UK Decca F 12403 1966
Van Morrison an Co. were on the way to disintegration with their eighth and final single for Decca, a cover from S&G's "Sounds of Silence" long player (itself based on a late 19th century poem by Edwin Arlington Robinson). Driven by a distorted, jarring guitar riff the number is far more rocked up than the original. It's bouncy feel and Van Morrison's almost disinterested singing however detracts from Simon's original venomous vocal delivery but somehow Them manage to make the number their own.

9. THE KYTES-"Blessed" UK Pye 7N 17136 1966
Behind a wall of almost overpowering jangly, but distinctly English electrified folk rock guitars comes this version of a tune from Paul & Artie's "Sounds Of Silence" album by U.K. harmony pop merchants The Kytes . They change things a bit by adding some organ that gives it a spooky/churchy feel that melds perfectly with it's almost dirge like delivery.

10. THE HARRY SOUTH STEREO BRASS-"Scarborough Fair" UK Phillips BF 1770 1969
Their were a host of S&D covers by lots of "easy listening" artists throughout the Sixties (even though they didn't write this their version brought it into a wider focus).  But none is better in my humble opinion than this over the top instrumental reading of "Scarborough Fair" loaded with brass, woodwinds, thundering drums, congas and funky drumming. Unearthed during the mid 90's easy listening phase it's highly sought after and rightfully so.