East London beat quintet (and later a sextet) Tony Rivers and the Castaways are best known for being Britain's biggest Beach Boys aficionados and having an incredible knack for perfect harmonies. But before the West Coast sounds bug bit them they were a run of the mill beat group. Their second British single was February '64's "I Love the Way You Walk" b/w "I Love You" issued on Columbia as DB 7224. Curiously it got a U.S. release on the predominantly soul/r&b Constellation in June, where it would be the band's only U.S. release.

"I Love The Way You Walk" is an unremarkable beat group rip off of John Lee Hooker's "Dimples".  It's a mid tempo beat number with some high Jan & Dean style falsettos and and tight harmonies, but it's fairly pedestrian stuff, a perfect instance of a great group cutting a mediocre track. 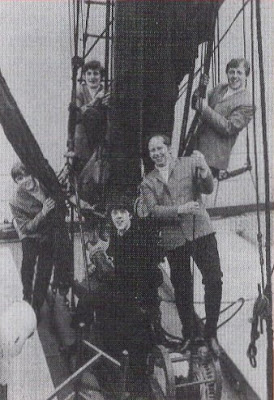 The real gem on this seven inch is the B-side (hence my picturing it here instead of the A-side) "I Love You". It's a powerful beat ballad with an angst ridden feel, superb harmonies, a mid tempo punch and some excellent chord/key changes.

Hear "I Love The Way You Walk":