10 LP's You Should Check Out 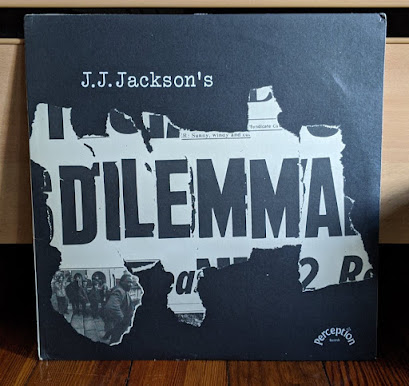 1. J.J. JACKSON'S DILEMMA-"J.J. Jackson's Dilemma" US LP Perception PLP 3 1970
A big hats off to Mark over at Monkey Picks for turning me onto this album awhile back. By 1970 soul belter J.J. Jackson's glory days were rapidly fading in his rear view mirror, a make over was in order and his backing group known as The Greatest Little Soul Band In The Land became J.J. Jackson's Dilemma. Recorded in the U.K. the album itself is all over the place, which can be both good and bad. There's a freakout guitar/flute instrumental called "Indian Thing" that borders on tedious, but then there's the horn heavy "Who Knows" (that recalls early Chicago) and speaking of Chicago there's an over the top reading of their "Does Anybody Know What Time It Is" that's worth the price of admission alone. It has been reissued on both CD and LP. 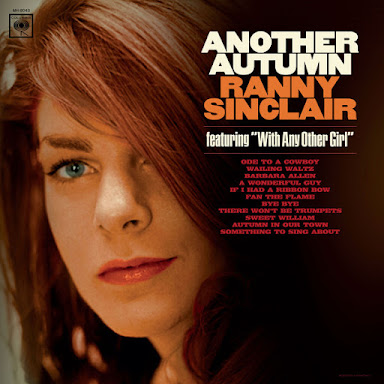 2. RANNY SINCLAIR-"Another Autumn" US LP Modern Harmonic MH-8043 2017
With a voice recalling the huskier tones of Ann Margret crossed with the childlike waif voice of Claudine Longet and the pitch of Lesley Gore, vocalist Ranny Sinclair cut four singles for Columbia in 1964-1966 (the final one with Dave Brubeck) that verge on jazz with others being mild pop before retiring from music. Presumably she had cut enough material to enable Columbia to release an LP in 2017 (eight of the twelve songs it contained previously made up her four singles for the label). "Ode to A Cowboy" (a 1965 A-side) is the best thing Lee Hazlewood never recorded and is my favorite of the bunch and "Fan The Flame"(her first single) is silky smooth and punctuated by some brilliant horns, while non-45 tracks like "There Won't Be Trumpets" is luscious jazzy elevator muzak with Lesley Gore style vocals, "Autumn In Our Town" is smoky jazz crooner pop and "Barbara Allen" is lyrically like something out of a creepy b-movie that would not have been at all out of place on a Scott Walker LP. It is available on both CD and LP. 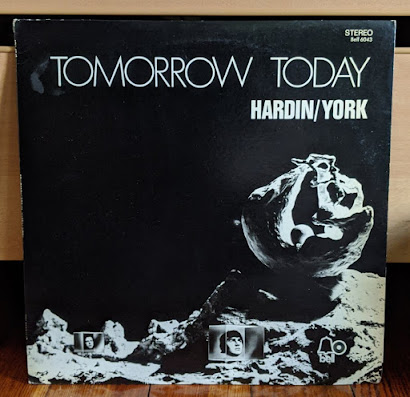 3. HARDIN & YORK-"Tomorrow Today" US LP Bell 6043 1969
From the ashes of the second line up of The Spencer Davis group vocalist/organist Eddie Hardin and drummer Pete York formed this duo. "Tomorrow Today" their debut LP is a rollicking mixture of soulful r&b, funky gospel tinged rock n' roll and an all round good time driven by Hardin's funky Hammond playing that can be as heavy as early Deep Purple or jazzy as The Peddlers. The LP is worth it for the title cut alone with it's deep churchy Hammond and Hardin's soulful vocals (sweetened by some angelic female backing vocals).  it's a brilliant slice of 1969 that is fortunately short on self indulgent solos and pretentiousness so indicative of it's release date. "Drinking My Wine" is like vintage Windwood era S.D.G. meets The Peddlers whilst "Candlelight" is pure early Deep Purple meets Argent organ grooviness. It has been re-released on CD by both RPM and Repertoire. 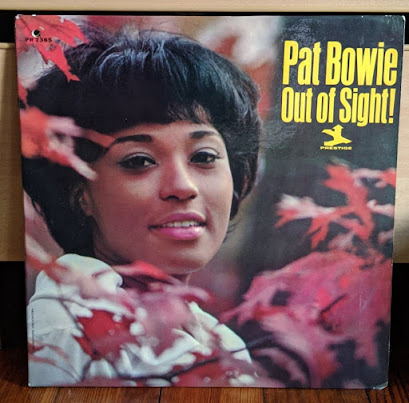 4. PAT BOWIE-"Out Of Sight" US LP Prestige PRST 7385 1965
Jazz vocalist Pat Bowie's sole LP is best known for it's inclusion of her much sought after debut Prestige 45 "I've Got Your Number". Musically backed by jazz heavy hitters like Milt Hinton (bass). Kenny Burrell (guitar) and Ray Bryant (piano), "Out Of Sight" is at times more supper club jazz which can be interesting (such as on "Get Out Of Town" with it's powerful vocals and smooth sophistication). But it can also be a tad mundane ("The Music That Makes Me Dance").  On the upside there's the hard hitting "What Is this Thing Called Love" (possibly the most up tempo track on the album) and the dreamy "Joey, Joey, Joey" (aided in no small part to the flute magic of Seldon Powell). Sadly it has not been reissued as of yet. 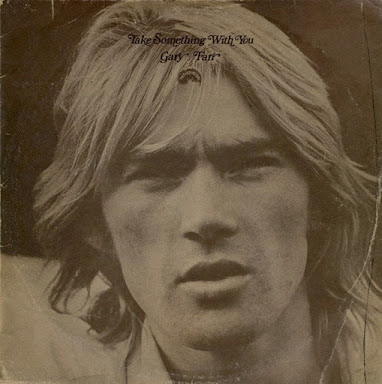 5. GARY FARR-"Take Something With You" UK Marmalade 608013 1969
British r&b veteran Gary Farr tread the boards for quite a few years in the mid 60's with nothing to show for it but a handful of singles and an E.P. that though are all decent bear nothing utterly remarkable. His debut solo LP for manager Giorgio Gomelsky's Marmalade label changed all of that. With help from former Action/current Mighty Baby members and produced by former Action lead singer Reggie King, "Take Something With You" is a brilliant LP that falls somewhere between the first Faces album and Colin Blunstone's first solo LP. Musically lots of the tracks come off like a less heavy Mighty Baby while Farr, having eschewed his blues belter vocals of '64-'66 has found his own voice that sounds like a perfect melding of laid back 60's California rock n roll meets baroque British late 60's folk/pop. The album's lead off tune "Don't Know Why You Bother Child" is a brilliant acoustic guitar/flute driven laid back number that sounds like an outtake from Mighty Baby's second album (ditto for "Green", "Curtain Of Sleep" and "Time Machine") and the title track is pure Ronnie Lane/Faces brilliance. "Why Not" is a wonderful tapestry of flute, acoustic guitar and Mellotron. Original copies are quite expensive but fortunately it has been reissued on both CD and LP (containing bonus tracks in both instances). 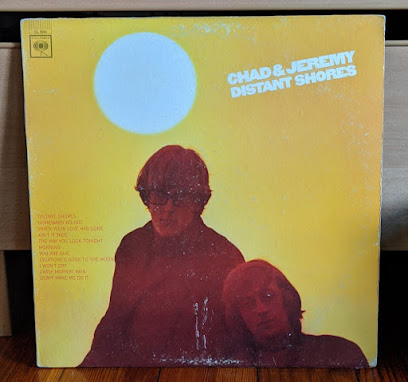 6. CHAD & JEREMY-"Distant Shoes" US LP Columbia CL 2564 1966
California based British expat duo Chad & Jeremy are often lauded for their two final US recorded long player's "Of Cabbages And Kings" (1967) and "The Ark" (1968) but little fanfare is ever given to their previous album, 1966's "Distant Shores". It sees them firmly moving out of the airy/folk duo pop of their earlier career and firmly ensconced in jangly, melodic pop full of Byrdsy 12 string guitars, Association style choral pop perfection whilst including obligatory (and sometimes pointless AND unnecessary) covers of contemporary standards. But don't let that last disparaging tidbit discourage you, "Distant Shores" is a mellow masterpiece.  There's a few pointless covers like "Homeward Bound" (though its use of tabla and harpsichord is interesting) and "The Way You Look Tonight". But there's a sublime "Everyone's Gone To The Moon" and the title track is a Byrds meet Association slice of California sunshine pop perfection, as is "I Won't Cry" and "Don't Make Me Do It". Sundazed has reissued it on CD and original LP copies are not terribly hard to find at a decent price. 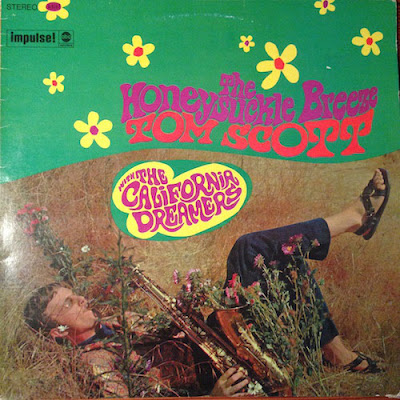 7. TOM SCOTT with the CALIFORNIA DREAMERS-"The Honeysuckle Breeze" US LP Impulse AS-9163 1967
With an album cover of a guy laying on his back blowing a sax in a field surrounded by colorful graphics that look like they were borrowed from a Blues Magoos album you know that this LP is going to be a little odd. The brainchild of saxophonist Tom Scott (and virtually a who's who of California session players like Glen Campbell, Carol Kaye etc), it's all over the place with a hybrid mix of jazz, raga sometimes with Ray Conniff style singers (perfectly personified with the opening/title cut). There's a slew of contemporary covers, The Association's "Never My Love" (essentially a note for note cover with some honking sax added), a baroque flute/harpsichord muzak "She's Leaving Home" (complete with cheesey vocals) and a sax led freaky version of "Mellow Yellow" that's like Lawrence Welk on a bad acid trip in an elevator! The rest of the LP follows suit from the raga meets Lee Morgan "Blues For Hari" (with some tasty vibes) to the Brady Bunch a Go-Go meets gospel raga of "Deliver Me" it's a bizarre trip worth taking!! It has since been re-released on vinyl as original copies are quite expensive to obtain. 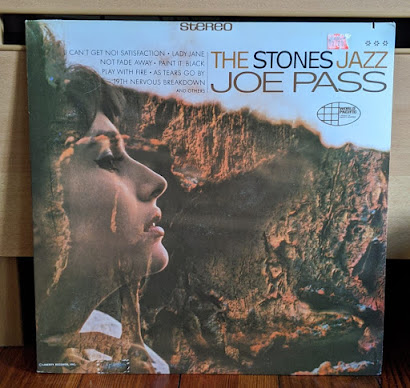 8. JOE PASS-"Stones Jazz" US LP World Pacific WPS-21854 1967
There were loads of jazz albums devoted to 60's rock n roll artists but my favorite of the lot is jazz guitarist Joe Pass 1967 album of interpretations of Stones tunes. Leaving the more trippy/raga jazz versions of Jagger/Richards to the likes of Gabor Szabo, Pass's versions verge on elevator muzak/easy listening thanks to the subtle horn arrangements it still manages to shine brilliantly and reminds me in part of Manfred Mann's jazzy instrumental readings of contemporary pop standards with vibes, flute and Wes Montgomery style guitar licks. There's an uptempo George Benson-esque "Play With Fire" and an upbeat/uptown reading of "Mother's Little Helper" that reminds me of something from an Oliver Nelson LP. But it's not all upbeat, there's a mild Samba/Cocktail jazz take of "19th Nervous Breakdown" and a subtle but swinging downbeat interpretation of "Paint It Black"and not a bad apple in the barrel to my ears. Original copies are quite affordable and there are also a Japanese CD issue from 2012 and a late 80's vinyl repressing by Memoir Jazz (in addition to a Japanese vinyl pressing). 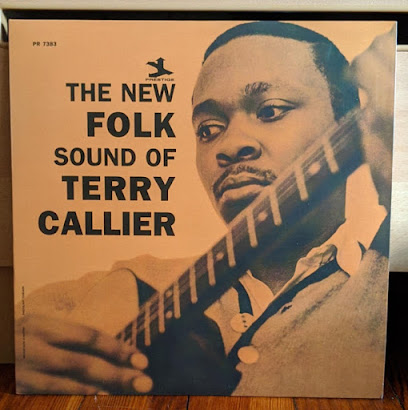 9. TERRY CALLIER-"The New Folk Sound Of Terry Callier" US LP Prestige PR 7383 1966
Vocalist Terry Callier is best known for his Northern soul "hit" "Ordinary Joe" but rewind to six years earlier when Prestige issued his debut (and astronomically expensive) long player and the name Terry Callier referred to an all together different kettle of fish. "The New Folk Sound Of Terry Callier" is a musically sparse folk/blues affair with just acoustic guitar (by Callier) and bass. His guitar playing reminds me of a less complicated Davy Graham while his powerful voice (the LP's greatest strength) is similar to that of Oscar Brown Jr. The album's stand out track for me is the morose but sublime "Johnny Be Gay If You Can" (an interesting tale of a man who's wife is snatched by Satan and then returned because she's so evil). Further LP stand out's in this folk/blues tour de force are "Promenade In Green", "Oh Dear What Can The Matter Be" and the majestic "Spin Spin Spin". It has been re-released on vinyl by Prestige and Craft Recordings  on CD by Craft (with original Prestige copies fetching as high as $500!!). 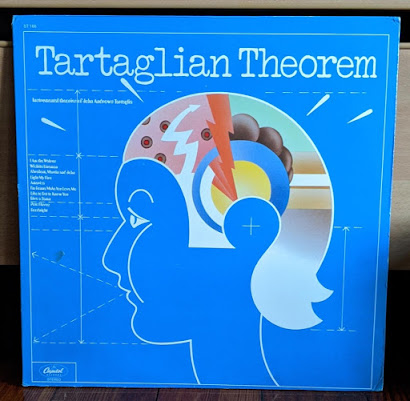 10. JOHN ANDREWS TARTAGLIA-"Tartaglian Theorem" US LP Capitol ST-166 1968
This album is a mystery to me. I can find no info about it other than it was the brainchild of a British born composer named John Andrews (or John Tartaglia depending what you read). He first came to my attention with his spaced out version of "Light My Fire" on the 1996 CD compilation "The Sound Gallery Volume Two". It sounded like something from the "Vampyros Lesbos" film soundtrack with it's spine tingling strings, fuzz guitar, sitar etc. Fast forward to a few years ago when I stumbled on the LP and it was even weirder! There's a brilliant Moog vs strings version of "A Day In The Life" that sounds like Arthur Fiedler and The Boston Pops doing mescaline with Enoch Light. The LP unfortunately can't decide if it's a freak out version of "101 Strings" or armchair muzak (see/hear his versions of "Abram, Martin And John" and "I'm Gonna Make You Love Me", yawn). BUT the LP's strength is in it's freakiness if you can skip the elevator muzak. Sadly outside of a few tracks being utilized on various artists lounge/easy compilations the LP has yet to be reissued, although original copies are not terribly expensive to obtain.
By William - August 07, 2020

Some great stuff there