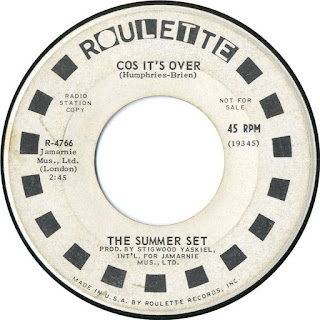 1. THE SUMMER SET-"Cos It's Over"  Roulette R-4766 1967
The Summer Set were a tight British West Coast styled harmony group who forever seemed to be on every bill at the Marquee Club in '66. Their sole American single was an October 1967 U.S. only cover version of The Flower Pot Men's U.K. hit "Let's Go To San Francisco" (issued here by Deram in August). It's pedestrian, but the guts are on the B-side, "Cos It's Over" a strong rocker powered by some great harmonies and a full on "Fleur De Ly's style" freakbeat backing. The coupling was also issued in Italy and Germany.
https://youtu.be/V6HRFMUoX_o 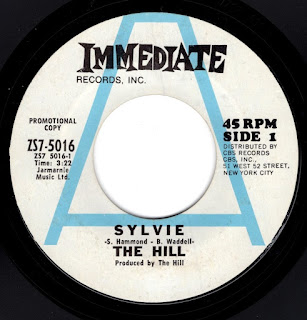 2. THE HILL-"Sylvie" Immediate ZS7-5016 1968
The Hill were former late era members of Chris Farlowe's backing band The Thunderbirds (they later cut an LP with Farlowe in 1970). They cut this one off 45 that was only issued in the U.S. and Canada for some reason. "Sylvie" is a slice of pop sike perfection with sweeping harmonies, orchestration and is pure pop perfection not too dissimilar to label mate Duncan Browne.
https://youtu.be/aMHnoriHUVI 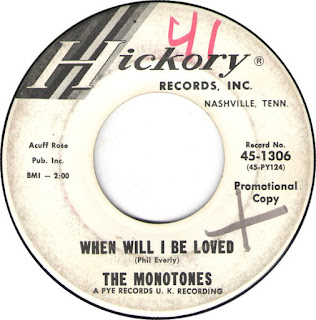 3. THE MONOTONES-"When Will I Be Loved" Hickory 45-1306 1965
U.K. beat act The Monotones cut four singles back home for the Pye label during '64-'65, and three in the U.S., two of which were not issued in Britain. The first of these was this rocked up treatment of the Everly's "When Will I Be Loved" with some Jimmy Page style volume pedal effects on the guitar, combo organ and an almost C&W feel to the vocals. Bassist Rod Clark was briefly a Moody Blues member when he replaced Clint Warwick in 1966.
https://youtu.be/R2tzySMPInM 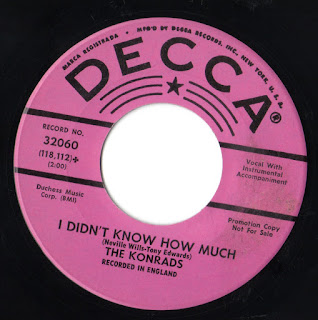 4. THE KONRADS-"I Didn't Know How Much" Decca 32060 1966
The Konrads would have been just another no name/no hope British beat combo had their sax player not gone on to become David Bowie. By the time the band were signed in 1965 their former sax player was already on his third band and third record, but that didn't stop the rumor mill and unscrupulous record dealers from insisting he was on this U.S. only release in the early 2000's when "Mojo" attempted to claim some possible D.B. involvement. All hype and conjecture aside their U.S. only release "I Didn't Know How Much" is not unlistenable, but it's not something I would play repeatedly. It kicks off with some powerful fuzz guitar and shows promise with interesting use of vibes but sadly turns into a weak Gary Lewis and The Playboys affair.
https://youtu.be/2rkuQXldX3g 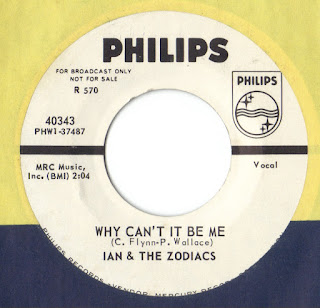 5. IAN & THE ZODIACS-"Why Can't It Be Me" Phillips 40343 1965
Liverpool's Ian & The Zodiacs were far bigger in Germany than at home and as a result they had far more releases over there (releasing five singles and three LP's in Der Fatherland). They also had five singles released in the U.S., among them was their fourth 45 "Why Can't It Be Me", a tough beat group rocker with a catchy riff that sounds not dissimilar to that of Roy Orbison's hit "Pretty Woman". Check out the clip of them performing it live on German TV's "Beat Club" here.
https://youtu.be/aCdkRUEnRfo 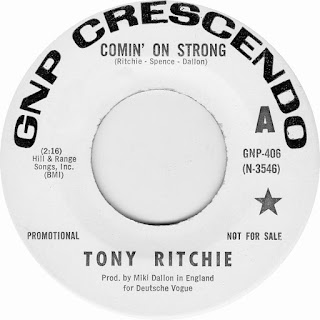 6. TONY RITCHIE-"Coming On Strong" GNP Crescendo GNP-406 1968
Singer Tony Ritchie, like former Sorrows front man Don Fardon was a protege of singer/producer Miki Dallon. This powerful fuzz guitar driven go-go mover by him was not released in the U.K. or Europe and remains a U.S. only issue and is quite in demand as a result of both of those factors. Curiously Don Fardon cut a version using the same backing track, but with the fuzz mixed down considerably hence lacking the bite and power of this record.
https://youtu.be/-gWcx4RSYbM 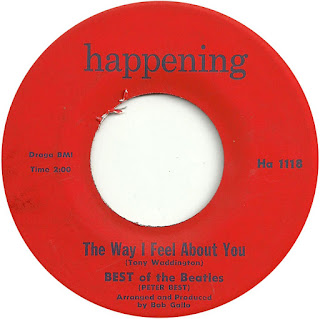 7. BEST OF THE BEATLES (PETER BEST)-"The Way I Feel About You" Happening HA 1117 1966
Like a previous entry's post on The Undertakers U.S. only 45 "I Fell In Love (For The Very First Time)" this 45 was recorded in New York City at the Talentmasters Studio (later the site of the Who's 1967 recording of tracks for "The Who Sell Out" LP) under the guidance of Bob Gallo who brought both bands over to capitalize on the Beatles craze. "The Way I Feel About You" sounds like a 60's U.S. garage track with it's cheezy combo organ and slightly out of tune guitars. The vocals are not by Pete Best but by Wayne Bickerton, later to become a producer and A&R man with band mate Tony Waddington for Deram/Decca in the U.K. where they were responsible for a host of pop-sike masterpieces as well as The Flirtations entire Deram output.
https://youtu.be/BlaS6ffr6IY 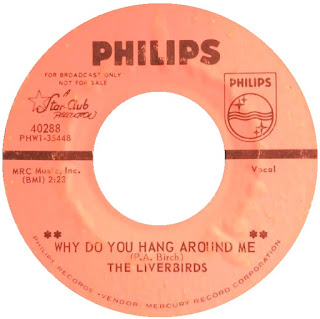 8. THE LIVERBIRDS-"Why Do You Hang Around Me" Phillips 40288 1965
Like Ian & The Zodiacs, The Liverbirds were a Liverpool group who prospered more in Germany, in fact they had no records ever released in the U.K! "Why Do You Hang Around" me is a perfect moody, beat/ballad that's everything The Delmonas/ Headcoatees wish they were. Downtrodden lyrics, morose backing vocals and a powerful yet subtle delivery proving that The Zombies were not the only masters of young love angst! It also was the simultaneous B-side to their U.S. single "Peanut Butter" which shared the same catalog number as this release (this copy was the A-side with a version of "Diddley Daddy" on the flip).
https://youtu.be/9bMnfQfUpgA 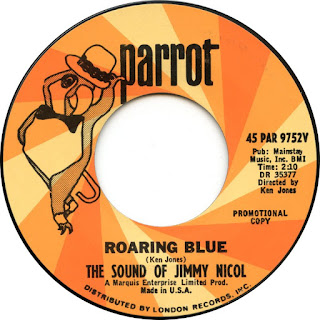 9. THE SOUND OF JIMMY NICOL-"Roaring Blue" Parrot 45-9752 1965
Drummer Jimmy Nicol's lucky day came while drumming for Georgie Fame and the Blue Flames and the call came to deputize for Ringo Starr (who was having his tonsils out) on a series of European and Australian live dates. Three singles were released after his short Beatles tenure in the U.K. and two were issued in the U.S. The last "Sweet Clementine" was released in both countries, but with different B-sides. The U.S. flip "Roaring Blue" bears more than a striking resemblance to Sounds Incorporated and Georgie Fame and The Blue Flames. It's an instrumental with brass and some wild organ that at times sounds like "One Mint Julep".
https://youtu.be/HoDBWjeA51k 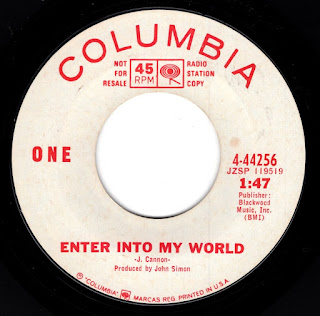 10. ONE-"Enter Into My World" Columbia 4-44256 1967
Former Undertakers lead singer/bassist Jackie Lomax released this U.S. only 45 as "One" after returning to Britain at Brian Epstein's suggestion after being adrift in NYC following The Undertakers split. The band were known as The Lomax Alliance and recorded almost an LP's worth of material which is where these tracks came from and had a U.K. single a few months prior, why it was released here as "One" is anybody's guess (They had been called The Lost Souls while gigging in NYC). The band' evaporated with the death of their sponsor a week after this record was released. "Enter Into My World" is an incredibly brief tune, but amazing with it's rugged guitar riff, catchy melody and cheery disposition.
https://youtu.be/4dfTkb_8E_0
By William - November 05, 2020

I love this blog. I have three of these 45's The Monotones, Ian & The Zodiacs (one of my favorites) and Tony Ritchie. Thanks for all the cool info you do an excellent job. Keep it coming.