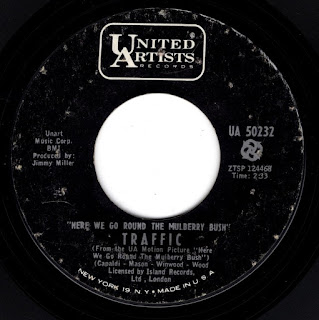 TRAFFIC-Here We Go Round The Mulberry Bush/Coloured Rain US United Artists UA 50232 1968
Traffic's third American single was the title track of the 1968 Swinging England Clive Donner romp about a young man's quest to lose his virginity. The single was issued in February of 1968 (in the U.K. it was also their third single but was previously released in November of '67 as Island WIP 6025). Like Traffic's two previous 45 releases in America it made absolutely no impact on the charts whatsoever.
Written by the entire band, "Here We Go Round The Mulberry Bush" is a departure for Traffic and their pop psych whimsy and almost sounds like it would be better suited for the likes of Island records label mates Nirvana. It starts out with a bit of pop psych whimsy thanks to the regal feel of the organ but the vocals have an air of "sing along" to them that for some reason puts me off. 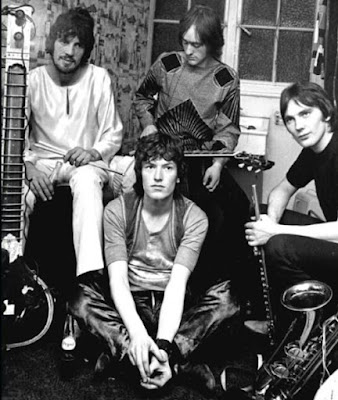 Bringing up the B-side we have "Coloured Rain". In my humble opinion it's one of the most powerful things the band ever cut. From Winwood's soulful opening lines to the way it all neatly falls together the track is nothing short of amazing. It has a swirling Hammond combining B-3 jazz and church, near eastern feeling woodwinds, Latin percussion, Roland Kirk style freak out sax and an almost ominous heavy lick that sees the track off whilst dueling with some gorgeous Hammond. Magic!  It easily would have made a better A-side.
"Hear We Go Round The Mulberry Bush" can be found on the CD release of the film soundtrack and as a bonus track on the CD reissue of their second LP "Traffic", while "Coloured Rain" is available as a bonus track on the CD reissue of their debut LP "Dear Mr Fantasy".
Hear "We Here Go Round The Mulberry Bush":
https://youtu.be/4_MKtpYw8Aw
Hear "Coloured Rain":
https://youtu.be/YJmQrfc6jGc
By William - November 27, 2020