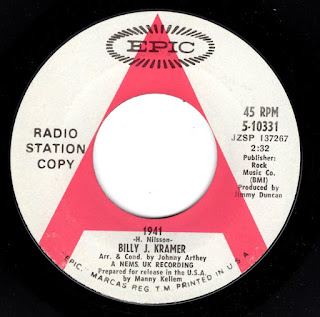 Billy J. Kramer-1941/His Love Is Just A Lie US Epic F-10331 1968
By 1968 Billy J. Kramer's days in the hit parade had long since vanished, he briefly was the co-host of a short lived music show "Discotheque" and was stuck in the unexciting cabaret circuit. His recording career in '68 was inaugurated with today's release.  In a much earlier post we had discussed his previous 45, a freaky 1967 one off for Robert Stigwood's short lived Reaction label. Kramer had been one of the few Liverpool acts (along with Cilla Black and of course The Beatles) who Brian Epstein retained in his stable of artists. When Robert Stigwood was brought into Epstein's NEMS company he was given Kramer which ultimately resulted in the previously mentioned 45 after Kramer's contract with EMI expired.  After Epstein's passing his brother Clive, along with Stigwood launched a record label in Britain called NEMS. Stigwood was eventually replaced in the organization by Vic Lewis and the label's debut release came in March 1968 with Billy J. Kramer's release of a Harry Nilsson composition "1941" (Nems 56-3396). NEMS did not issue any American releases so Kramer's new 45 was launched two months later in the U.S. by Epic.
American singer/songwriter Harry Nilsson was, like Randy Newman, slowly taking Britain by storm with a host of covers of his tunes thanks in no small part due to the patronage of The Fab Four who loved his debut 1967 LP "Pandemonium Shadow Show". Kramer was the first artist to cover "1941" though The Alan Price Set played it in a live BBC session. His version differs little from the original, in fact it took me a few listens to both versions back to back to make sure it wasn't the same backing track! The musical accompaniment on this version is slightly more martial and regal, with some subtle differences in the horns. Kramer's vocals have more of a bite in parts and regardless of it's lack of originality the whole thing really works for me! 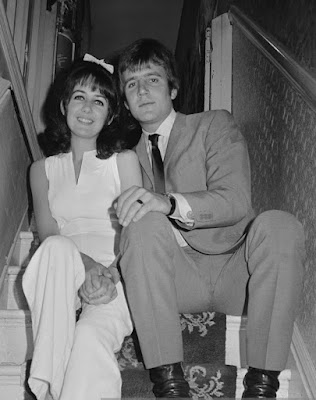 Mrs & Mr. Kramer at home, 1968.
The flip "His Love Was Just A Lie" is a pedestrian orchestrated pop track. It sounds like one of those nameless tracks used as filler on one of the volumes of the "Piccadilly Sunshine" CD comp pop series right down to it's vibraphone and cello.
To my knowledge neither side has been comped anywhere, which is unfortunate in the case of The A-side!
Hear "1941":
https://youtu.be/CNUz7RYcLww
Hear "His Love Was Just A Lie":
https://youtu.be/ozUVLeFH2Xk
By William - November 12, 2020