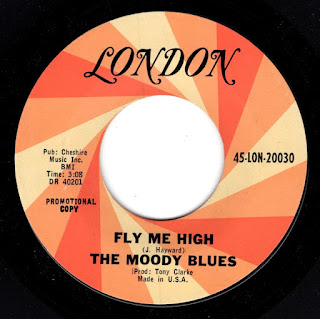 THE MOODY BLUES-Fly Me High/I Really Haven't Got The Time US London 45-LON-20030 1967
By 1967 our intrepid British r&b disciples The Moody Blues had undergone a major metamorphosis. In 1966 bass player Clint Warwick was replaced by Rod Clark, formerly of a beat group called The Monotones. The band had also began a slight shift away from r&b and playing jangly, poppy tracks as indicated on their later singles (and a host of brilliant unreleased '66 tracks issued in the deluxe version of their debut LP "The Magnificent Moodies"). Later in the year lead singer Denny Laine would be gone too with a short lived but brilliant career on Deram to follow. The Moodie's seemed finished but by 1967 like a phoenix rising from the ashes they returned fronted by Justin Hayward on lead vocals and guitar (formerly of Marty Wilde's backing group) and John Lodge on bass. Decca wasted no time racing the band into the studio in March of 1967 to begin what would become the new line up's vinyl debut. The new mark Moodies made their 45 debut in the U.K. in May of 1967 with this release as Decca F 12607. It was issued here in the States in July.
"Fly Me High", a Hayward original is nothing short of ethereal brilliance. It's a mellow tune with just acoustic guitar, bass, drums and piano but it's the amazing harmonies (that would become this new line up's trademark) that carry the number. Hayward admitted in the Moodie's documentary "Legend Of A Band" that the track was "about pot". There's a catchy piano lick in it as well that has a hit of edge to it with a slight reverb/phlange on it (check out the new line up besuitted Moddies doing this crazy earlier live version cut for French TV in '66 with combo organ instead of piano).
The flip, "I Really Haven't Got The Time" was penned by keyboardist Mike Pinder. An earlier unreleased until version was cut in '66 with Denny Laine and Rod Clark and this line up performed it on several European TV shows (Germany's "Beat Club" among them). This version was unearthed for the deluxe edition CD reissue of "The Magnificent Moodies". The re-recorded version here is a bit different but not by much. It's jaunty and the piano has a bar-room ivory tinkling to it and a catchy happy go lucky feel to it. The high backing vocals are a bit more restrained (Clarke's backing vocals on the first recording always grated on me). It's not unlistenable but not something I would want to play again and again. 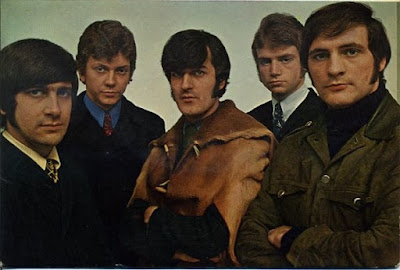 The single did nothing chart wise on either side of the Atlantic and it would be the band's last US single on London before moving to Deram as London opted to not release the band's next (and final) UK Decca single, the powerful "Leave This Man Alone" . Curiously several European pressings of "Fly Me High" featured picture sleeves of the old Lane/Warwick line up and it would take awhile for their art departments to step up their game.
Both cuts were issued on a strange 1968 catch all Moodie's comp LP (obviously not catch all enough as none of the unreleased tracks from the above mentioned deluxe edition of "Magnificent..." are on it) along with a host of later era Laine tracks. Both sides are also on a budget CD of all the band's Decca/Deram A and B sides titled "The Singles" and an even earlier CD release called "Prelude".
Hear "Fly Me High":
https://youtu.be/-lQrZpSyevU
Hear "I Really Haven't Got The Time":
https://youtu.be/JwbIOwzl2eg
By William - November 19, 2020