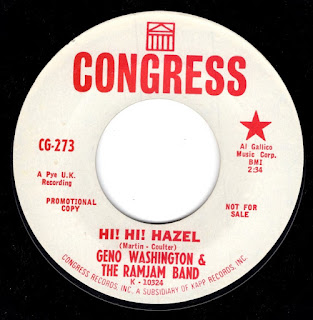 GENO WASHINGTON AND THE RAM JAM BAND-Hi Hi Hazel/Beach Bash US Congress CG-273 1966
U.K. based American born singer Geno Washington burst onto the British music scene in 1965 with a rare as hell Columbia records cover of "Shake Shake Senora" before switching to Pye records in 1966 under the guidance of John Schroeder. Today's subject was his third UK 45 issued as Pye 7N 35329 in July 1966, a U.S. release arrived at the same time where it was his second American release.
"Hi! Hi! Hazel" came from the pen of songwriter's Bill Martin and Phil Coulter. All of my research indicates that Geno and Co. were the first artists to record this number. Regardless of who did it first it's a god awful tune. It's mundane and tepid and ranks among one of the most unlistenable tracks by the band.
Fortunately there is redemption in the form of the B-side, a cover of a 1964 instrumental single by The Mar-Key's called "Beach Bash".  The Ram Jam Band's arrangement sticks fairly close to the original, though the horns carry less power. Of interest however is the fact that this version adds a ska back beat and a blistering bit of guitar (the reminds me of The Remo Four's amazing 1966 version of "Peter Gunn"). There's also an organ higher up in the mix, which the original lacks. 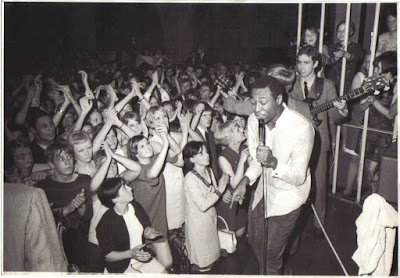 Geno and the boys tearing it up onstage somewhere in the U.K. 1966
Both sides are available on the highly recommended double Geno Washington and the Ram Jam Band CD retrospective "My Bombers My Dexys My Highs: The 60's Studio Sessions" on Castle Music.
Hear "Hi! Hi! Hazel" (or don't):
https://youtu.be/dWMVnDdUUT4
Hear "Beach Bash":
https://youtu.be/wzr69zT1jlc
By William - October 29, 2020