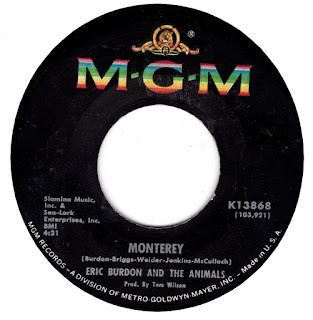 L.S.D. changed a lot of people in the music world, and none more so than Newcastle's own Eric Burdon who made the leap from Geordie brown ale supping flat cap wearing r&b disciple to full blown acid eating flower child.

The Animals were huge in the States racking up eight hits here on the MGM label before Burdon revamped the line up with all new faces retaining only the last Animals drummer, ex-Nashville Teen Barry Jenkins and rechristening themselves as "Eric Burdon & The Animals". And with this revamp came the make over brought on by changing times and a little something called Lysergic Acid Diethylamide. By mid 1966 Burdon became a full on L.S.D. convert and the band's predilection for Chuck Berry took a back seat. Such was Burdon & Company's freak street cred that they were among the handful of British acts invited to perform at the Monterey International Pop  Music Festival held in Monterey, California June 16-18, 1967. Burdon also introduced The Who at the gig and then commemorated the event with the release of this December 1967 single "Monterey" (it not released in the U.K. until the following year).   As cringe worthy as the lyrics are (especially when Burdon refers to Ravi Shankar as "Ravi Shanknar") with all the name checking (Hendrix, The Byrds, Brian Jones as "His Majesty Prince Jones", The Who etc) it's musically interesting. In some cases with each mention of a particular musician there's something musical to represent them, ie electric sitar during Ravi Shankar's name or a trumpet riff during Hugh Masekella's mention.  The whole track is carried around by a raga guitar lick mixed with some horns that have a slightly "pop" music feel, being neither jazzy nor r&b and then some sawing cello/violin comes in to add an even freakier effect.

"Ain't That So" is an interesting number. It's an almost polar opposite of the A-side. Kicking off with a Dave Clarke Five style drum roll it reminds me a bit of "We're Not What We Appear To Be" with it's fuzz guitar and lyrical message of "freedom for youth" ("you stick to your scene baby, we got our own"). Regardless of it's "message" I really dig it, it's repetitive chorus grows on you! 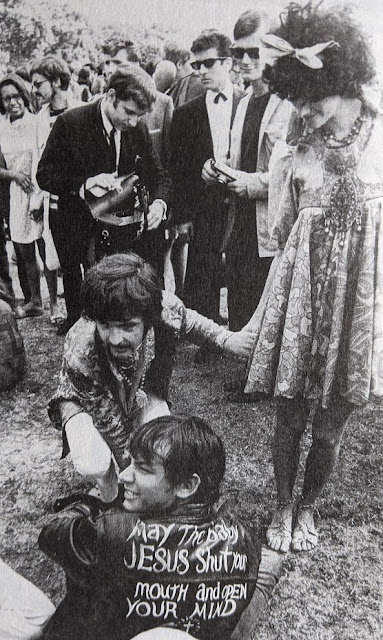 "And may the baby Jesus shut your mouth and open your mind": Burdon mixes psychedelia with evangelism.

Both sides are available on an extensive five CD retrospective "When I Was Young: The MGM Years 1967-1968".

A track that got me out of a sticky situation, when I DJ'd at the Laurel Tree in Camden Town, London, in the mid 1990's. As I was cueing a record on one of the turntables, the needle cartridge fell out. So I had to find a couple of long tracks while I did repairs. The Doors' LA Woman quickly slung in the CD deck, then finally had the perfect moment to play the Burdon track while just enough blu-tak was found to get the other deck back into action for the rest of the night,