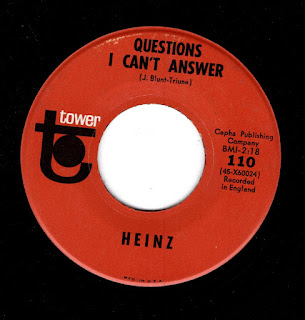 HEINZ-Questions I Can't Answer/The Beating Of My Heart US Tower 110 1964
U.K. producer Joe Meek's "golden boy" and one time Tornados bassist Heinz Burt had a host of 45's issued in the U.K. as a solo artist. London issued his debut US 45 "Just Like Eddie" (45-9619 ) in October 1963 but 1964 saw Heinz joining the host of Meek acts who's material would be leased for U.S. release through Capitol records Tower outlet (we profiled a Tornados release on the label here and a Tom Jones one here).
"Questions I Can't Answer" was Heinz's sixth U.K. 45 (issued as Columbia DB 7374 in October 1964). It was issued simultaneously here on Tower and like all of Meek's other singles on the label it failed to chart. "Questions I Can't Answer" is an interesting number, kicking off with some sax and a "Louie Louie" style beat. It's one of Meek's more sophisticated productions, but that is in no small part due to arranger Ivor Raymonde who "sweetened"the track up (as he did with many Meek releases transforming his muck into something more commercially viable). The drums are unmistakably Meek's trademark sound but there's an interesting almost phased/backwards piano effect at about 0:10 in that's incredibly ahead of it's time followed by ivory tinkling and female backing vocals.
The flip "The Beating of My Heart" is a full on over the top Meek production with lots of echo, spacey backing vocals, that archetype drum sound etc. None of this can save the number for me despite the great intro as it, to my ears, descends into a mundane ballad worth it only for the freaky arrangement and a blistering guitar solo (Richie Blackmore?). 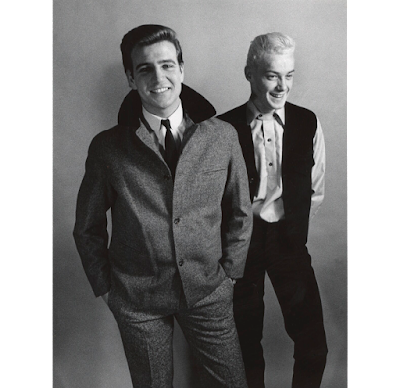 Billy J. Kramer with Heinz, 1964, photo by Lewis Morley
The A-side appeared on the Castle Music Joe Meek two CD compilation "Joe Meek: The Alchemist Of Pop", and both sides appear on a 2013 double CD collection "Heinz: The Essential Collection".
Hear "Questions In Can't Answer":
https://youtu.be/dxmyUpaKDMk
Hear "The Beating Of My Heart":
https://youtu.be/2_VhN0UwjsU
By William - October 16, 2020