The Searchers "Take Me For What I'm Worth" 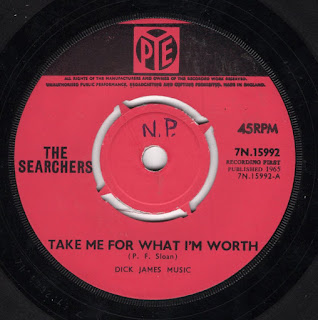 We could fill and entire post talking about The Searchers and their "folk rock" sound, but I'm not going to do that. What we are going to discuss is their twelfth U.K. single, "Take Me For What I'm Worth". The band's drummer Chris Curtis was well known for his "ear" for potential hits to cover and he dug up this P.F. Sloan track for them to cover (he later suggested in an interview with journalist Spencer Leigh that it was "probably the first gay anthem"). Strangely enough Sloan's version appeared on a French E.P. one month before this version hit the streets in England in November of '65 (December in the US).

"Take Me For What I'm Worth" ranks as one of The Searcher's strongest numbers in my estimation. It was their next to last visit to the British charts clocking in at #20 (the last would be their version of The Stone's "Take It Or Leave It" which would climb to #31). Kicking off with a mournful guitar lick and Mike Pender's equally downtrodden vocals it's powered by some amazing guitars and a powerful strumming that resembles the chording of The Jam's later hit "That's Entertainment". And of course there's P.F. Sloan's brilliant "don't get mixed up with me I'm bad news" lyrics delivered by Pender at times with an almost venomous lilt.

The B-side "Too Many Miles"was penned by all four Searchers (Frank Allen, Chris Curtis, John McNally and Mike Pender respectively). It's a mellow number with this almost baroque feel that reminds me of something off The Move's first LP! Not their best track but certainly an interesting touch for 1965! The woodwind solo is clearly ahead of it's time. 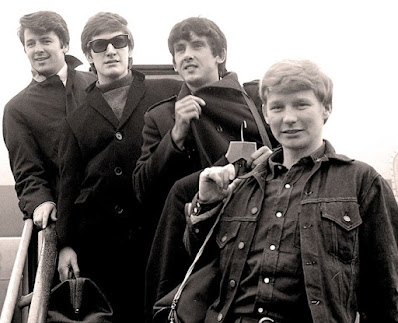 Both sides are available on a host of Searchers collections that thanks to the likes of Castle Communications are NEVER out of print. I highly recommend their 1965 LP "Take Me For What I'm Worth" which contains both sides of this single.

Hear "Take Me For What I'm Worth":

Hear "Too Many Miles":