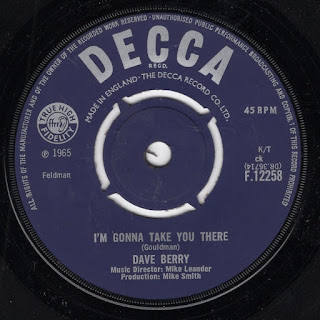 DAVE BERRY-I'm Gonna Take You There/Just Don't Know UK Decca F.12258 1965
British crooner/rocker Dave Berry was an early artist to take advantage of Manchester songwriter Graham Gouldman's wares when he cut this track as his eighth UK single (the follow up to his cover of  Ray Davie's "This Strange Effect"). Gouldman's visits to the hit parade had, at this point only been confined to The Yardbirds readings of "For Your Love" and "Evil Hearted You".
Starting off with some brass and harpsichord "I'm Gonna Take You There" is an interesting track. The musical backing is top notch but Berry's voice sounds so soulless, maybe it's the track itself but for a Graham Gouldman track the number does absolutely nothing for me. It reached #22 in the U.K. charts.
Berry had a history of recording crooners/ballads on the A-side with studio musicians and recording rockers on the B-sides with his backing band The Cruisers. "Just Don't Know" sees him backed by them. It's a folk rock type thing with some jangly guitar and sounds unsurprisingly like a Simon & Garfunkel cast off. It was actually penned by Berry and someone named Canter. 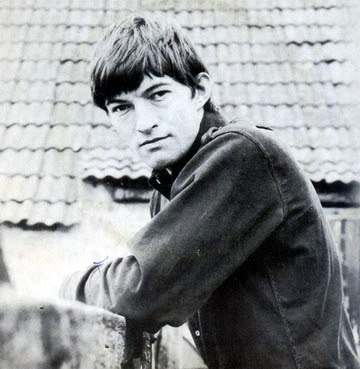