Rolling Stone Bill Wyman's "proteges" The End had been around since 1964. To call them his "proteges' is sort of a backhander because the band were a perfectly capable act that had quite a bit of experience under their belt (more on that in a bit). Wyman's connection with the band goes way back. He produced their 1965 7" debut "I Can't Get Any Joy" (UK Phillips BF 1444/US Phillips 40323 both October 1965) after meeting them when they were backing Andrew Loog Oldham find Charles Dickens on a series of U.K. concert dates with The Stones. Fast forward to nearly two years later and the band were still soldiering on and Wyman was still their champion having produced four of the band's Spanish only 45 releases (where they had taken up residence and apparently had quite a successful following). 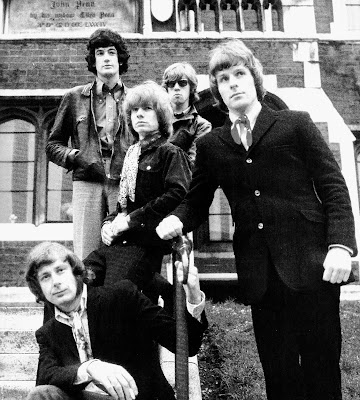 "Shades Of Orange" and it's flip "Loving Sacred Loving" were both written by Wyman and a protege named Peter Gosling (who's band Moon's Train were also produced by Wyman). Curiously "Loving.." received it's first airing as an A-side in Spain in 1967 (Sonoplay SN-20.054). Both tracks (along with subsequent tracks on their sole long player, 1968's  "Introspection") were recorded utilizing Stones session time for their "Satanic Majesties Request" long player at Olympic studios. When his band mates would fail to turn up Wyman would ring The End and get them in and get cracking, sometimes working into the wee hours of the morning (on one such session Charlie Watts was roped in to add tabla to "Shades Of Orange"). Amazingly on such short notice the results were impressive.
"Shades Of Orange" first came to my attention in the Summer of 1986 with See For Miles records dropping their monumental various artists LP comp "The British Psychedelic Trip 1966-1969" full of Deram/Decca goodies, with "Shades of Orange" holding it's rightful place among peers like Tintern Abbey, World of Oz Etc. Driven by restrained (and brilliantly phased) brass, Watt's tabla and eerily spooky keyboards it's a thoroughly atmospheric track that picks up steam during the chorus with snatches of Jimi Hendrix inspired guitar crunch before reverting back to an almost solemn musical reverence.
"Loving, Sacred Loving" is of course built on the assistance of yet another guest musician care of Wyman's association, this time it's Nicky Hopkin's harpsichord that lends itself to the dreamy feel of the track (which at times reminds me of Wyman's own "In Another Land" from the "Satanic Majesties" album). Fattened up by layers of otherworldly sounding vocals it has an almost enteral feel to it and again one listens to it's amazing production and wonders why in the world Bill wasn't allowed to produce his own band (witness the mess that is "Have You Seen Your Mother Baby"). The track was hilariously passed off as a jam involving the Beatles and the Stones in the 70's!
Both sides are available on a variety of places, the easiest to find being multiple issues of their LP "Introspection".
Hear "Shades Of Orange":
https://youtu.be/TW2ot5lY99w
Hear "Loving, Sacred, Loving":
https://youtu.be/TLxqLVuubRk
By William - September 07, 2021

Email ThisBlogThis!Share to TwitterShare to FacebookShare to Pinterest
Labels: Bill Wyman, The End