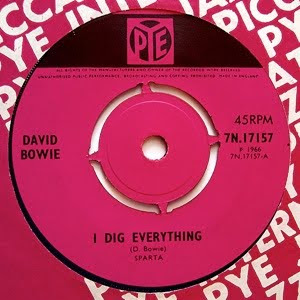 DAVID BOWIE-I Dig Everything/I'm Not Losing Sleep U.K. Pye 7N.17157 1966
David Bowie's third single (technically it was his 6th but since he'd changed his name to "Bowie" on the previous two 45's...) and also his second offering on Pye records (one of three the label would put out in 1966) hit the world in April 1966.  By this point he had ceased working with The Lower Third and now employed a backing group known as The Buzz who'd accompanied him on "Ready! Steady! Go!" (see January, 30, 2010 entry) to plug his first Pye offering "Can't Help Thinking About Me".  Presumably it is The Buzz who back him on this 45 and it's predecessor ("Do Anything You Say"/"Good Morning Girl" Pye 7N.10779), but it has also been written that studio musicians were utlized on these last two Pye singles.
"I Dig Everything" is an archetype 60's "Swinging London" record.  I mean that in a good way. I'm not talking about the exploitative tag thrown on the city when some dipsh*t deb from NY called it that in an issue of "Time" magazine (having spent all of two weeks there it's been said).  What I'm addressing is the "hip" manner in which period records were made then with bits and bobs of this and that chucked into the recording that people, usually square A&R men thought was "cool".  "I Dig Everything" is lyrically a post beatnik/art student pre-hippie observation from the standpoint of a layabout who has cool friends ("some of them are losers but the rest of them are winners") who are broke ("though they're low on money their intentions are tall") and having little or no responsibilities is content to sit back and watch the world stroll by.  Bowie was still at this point living at home with his parents in their semi detached in Bromley and living a semi-Bohemian lifestyle with occasional dossing at friend's flats up in London proper without having a job ("ain't had a job in a year or more") and pretty much doing what he wanted, when he wanted so it's safe to say this is, in essence semi-autobiographical and therefore somewhat "firsthand".  It's carefree wittiness can be taken both seriously and tongue in cheek. I also think it shows a degree of kiff smoking in it's inane stunts ("I wave to the policeman but they don't wave back they don't dig anything" , "I've made good friends with the time check girl on the end of the phone" or "I feed the lions in Trafalgar Square..") to it's semi stoned mantra/main chorus ("every thing's fine and I dig everything").  Perhaps it's a cheery side to it all as opposed to the gloomy side of London at the time as illustrated in Dononvan's "Sunny Goodge Street", also on Pye. The musical backing contains some snatches of Hammond organ, congas and  flute which was conjured by Pye's very own in-house George Martin; Tony Hatch.  It all flows very well thanks to the nice interspersing of this full array of instrumentation.  The flipside is one of my fave 60's Bowie tracks with a slew of Swinging '66 style studio musicians adding congas, flute, cabasa/shakers, some muted fuzz guitar to the mix while D.B. provide some excellent vocals as he sings the ultimate putdown number to a gal:
"don't look down your nose at me, cos I won't ask for sympathy, I won't be your yes-sir man for anything" 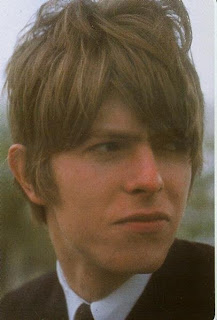 Both sides are contained in various compilations of 1966 Bowie material.  Notably the 45/CD box set of all three Pye singles (A's and B's) "I Dig Everything:The 1966 Pye Singles" or it's predecessor from the late 80's (that's still floating around in used bins in all good record shops) "1966".  The tracks can also be found on Rhino Records comprehensive pre-Deram Bowie 60's collection CD "Early On" which compiles all of his 1964-1966 material (plus some acetate demos). 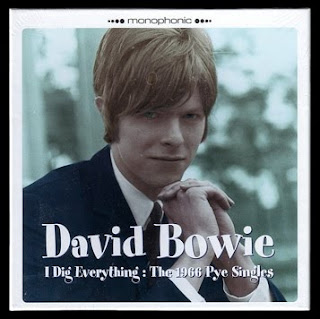 I love David Bowie during this period, he was looked so immaculate.

That makes two of us!

Thanks for this article wilthomer. Believe it or not, I bought this single at the time because his name was similar to one of my favourites - Dave Berry. I guess it must be worth a bit as I can't find any copies for sale.

Thanks for your comment Up Over Dad. That 45 is worth a small fortune I can assure you:

Popsike.com gives you sales from E-Bay etc for an idea of prices! A worthy investment I'm sure! Cheers!

thanks for the link