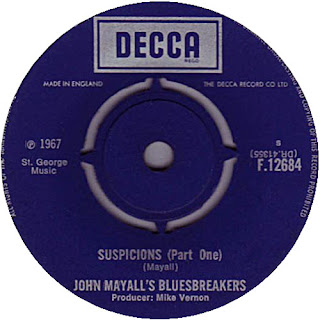 By October 1967 John Mayall and the Bluesbreakers had been slogging it out with cult status up and down Great Britain with no chart status to compliment it for over three years. The Bluesbreakers were a "finishing school" for a sucession of great British blues guitarists from Eric "Enoch's Our Man" Clapton, to Peter Green and onto Greenie's replacement, ex-Gods member Mick Taylor who made his debut on today's disc in focus. Always a "musician's musician" Mayall nonetheless was a devoutly revered artist by both his label and in their house producer, the great believer in the blues himself Mike Vernon.

The band in 1967: Dick Heckstall-Smith far left, Mayall to his right with a youthful Mick Taylor to his right, Keef Hartley, Andy Fraser and Chris Mercer.

I'm not going to give you a history of the band but I will tell you that this was Mayall's 10th single issued in the U.K. (that is if you count "I'm Your Witch Doctor" twice as it was issued twice by Immediate).  What really makes this number one of my favorites is that it slightly defers from the sometimes borderline mundane "white boy blues rock" pitfall that the band occasionally got mired in.  This is in no small part thanks to the stellar horn section that fleshes the sound out led by the mighty saxophonist (recently ex- of the Graham Bond Organization) the late, great Dick Heckstall-Smith.  Mayall gives one of his best vocal performances ever as he belts it out about a woman he thinks is being unfaithful and from his delivery you almost believe he's for real:

Mick Taylor contributes some tasty licks that are short and sweet but nonetheless brilliant bringing in an understated approach which varies substantially from his predecessor's tendencies to go on a bit too much sometimes. And ex-Artwood's drummer Keef Hartley is along for the ride on drums and future Free bassist Andy Fraser and future Wynder K. Frog member Chris Mercer on sax round out the line-up. How's that for a "Who's who" of British 60's r&b? 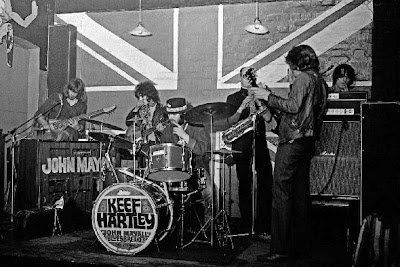 
"Suspicions" is available on numerous Mayall collections, my fave being Deram/Decca's "Through the Years" CD where I first heard the number years ago when I decided I needed to investigate more Mayall than his brilliant debut album "Live At Klook's Kleek".