Yes it's that time of the month again kids (ooo that didn't sound right?) where I dole out what I've been digging the past month: 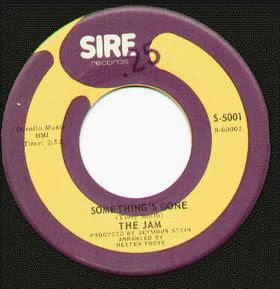 1. THE JAM-"Something's Gone"
I've no idea when this number was actually recorded, but it wasn't released until the early 70's.  I was first turned onto this in the 80's on a cassette by a CA penpal I had a mad crush on (I believe she got it from a "Pebbles" volume).  It still blows me away with it's churchy Hammond trills and Beach Boys type harmonies (though not as fey or wanky as Mike Love and Co.) and has nothing to do with a combo from Woking, Surrey, U.K.   Twenty five years later it still sounds cool as *uck. 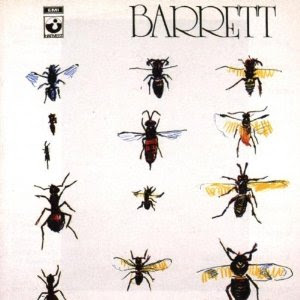 2. SYD BARRETT-"Waving My Arms In The Air"
I've undergone a major Syd Barrett renaissance around "Anorak Thing" H.Q. as a result of reading the brilliant "Syd Barrett: A Very Irregular Head" by Rob Chapman and this ones been amongst the one's I've spun.  Like most solo Syd stuff it's not without it's clumsiness but you've gotta hand it to Wright/Gilmore/Waters and Jerry Shirley for actually managing to play along with his choppy/impromptu numbers that seemed to sometimes have quickening or slackening paces.

3. SONNY TERRY & J.C. BURRIS-"You Keep Doggin' Me"
My pal Scott pared down a four CD blues box set to two discs and duped them for me and this number jumped right off the disc at me the first time I played it and it's been with me ever since.  Amazing harp driven stuff that provided the soul and driving inspiration for all those British bands that "Pebbles Volume Six: The Roots Of Mod" turned me onto. 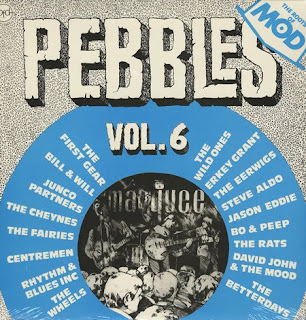 4. DAVID JOHN & THE MOOD-"I Love To See You Strut"
Where would American 60's British r&b fans like me be without "Pebbles Volume Six: The Roots Of Mod" I ask you?  This catchy bit of home brewed British rhythm and blues sounds as amazing now as it did back in 1982 when I first took a chance on this famous LP.  I think what makes it work is that it's a bit more freakbeat than the sort of mundane r&b that The Stones, Pretties, Downliners et al were churning out at this time, no doubt aided by Joe Meek's production/recording techniques (he produced all three of their 45's).

5. SOMEBODY'S CHILDREN-I'm Up
There's a small genre of American 60's records that indulged in witty little double entendre with slight fake British accents I'm sure, if there was/is, "I'm Up" is one of them.  Delivered tongue and cheek with a nice squeaky clean jangly/countrified 12 string guitar sound and some groovy harmonies this number sings about "taking a walk" with the word "trip" and the phrase "I think I'm coming down" thrown in for good measure along with "oh let it rain oh hell I don't care, I hope they don't bother me 'bout my hair" for topical content.  For more on these lads pop on over to the excellent "Flower Bomb Songs" site for more:

6. THE SUGARBEATS-"Alice Designs"
1966's "Alice Designs" comes from the pen of Tandyn Almer, the gent responsible for The Association's "Along Comes Mary" and The Action's "Shadows And Reflections". The Sugarbeats were an British band who deliver the number in perfect West Coast harmony style with some groovy atmospheric (see "trippy") flutes among layers of crisp choral pop magic.  The record of course is obscure as hell and I'd love to know how a relatively unknown act like these guys got a hold of this track! From the "We Can Fly Volume 3" CD series.  Dig what I mean:

7. THE TEMPTATIONS-"There's A Definite Change In You"
How this wound up on the cutting room floor till resurrected for the first volume of the "Cellarful of Motown" double CD series is beyond me.  It's got the hooks, the danceability factor, excellent vocals, stellar production and those amazing backing vocals that Motown groups were known for.  But somebody at the weekly board meetings must've given it the thumbs down.   Criminal! 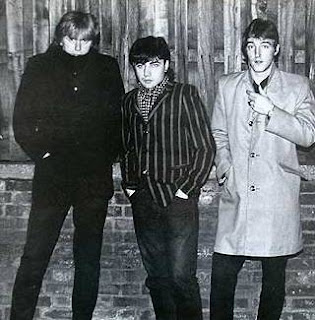 8. THE DIRECT HITS-"The Heat And Sun"
The Direct Hits were one of those pseudo 60's U.K. bands that I liked in the 80's who wrote nice little pop ditty's that took cues from The Beatles/Kinks/Hollies/Who but had 80's production techniques and equipment at their disposal.  Most of  this trio's catalog didn't hold up well 25+ years on but I recently discovered their 2nd LP 'House Of Secrets" on iTunes for $9.99 ($9.99?  What a deal!).  The LP always reminds me of 1986, not a really good year for me and this track always makes me feel sorta melancholy but it's harmonies, jangly guitars and cheeky/cheeriness (with "Tomorrow Never Knows" drums) never fail to stop me in my tracks. 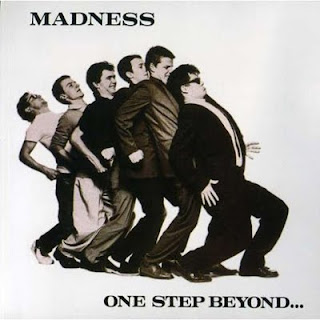 9. MADNESS-"In The Middle Of The Night"
I just finished reading the amazing 33 1/3 book on the Nutty Boy's debut LP and I went back and rediscovered the LP. A few years back I heard the Kilburn & The High Roads album "Handsome" and wrote Madness off as a bunch of copyists.  They weren't, though they owe at least 3/4 of their career to Ian Dury's early years.  This was always my fave song on the LP and still is.  If you know me you'll know I like songs that paint little stories every now and then.  This one's about an old man named George who runs a newsstand by day and steals underwear from clotheslines by night.  It's a groovy little track that's 1/3 "Arnold Layne", 1/3 Kilburn and Co. and 1/3 Pet Clark's "Downtown". 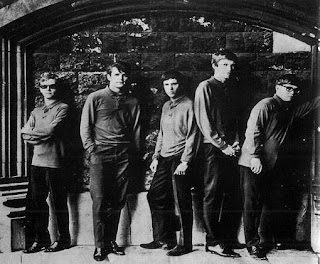 10. STU BROWN & BLUESOLOGY-Just A Little Bit
This was the last 45 by Bluesology (who featured one Reggie Dwight, later to become Elton John on piano).  The number was written by Kenny Lynch and Mort Shuman and released as a B-side in 1967 (it was covered the following year by the freakbeat group The Act and graced Rubble's "Freakbeat Fantoms" LP).  Driven by some cool bass, Stax style horns, Action style backing vocals and Reggie's pounding piano it's a cool bit of soul injected 60's British  r&B that's highly reminiscent of Cliff Bennett & The Rebel Rousers '66.  Hear it:

I was also listening again to the Direct Hits the other week but never bought that second LP - heavens knows why becaue I loved (and still very much like) the first "Blow Up" one. There's a nice sort of "homeliness" about them.

"Something's Gone" was actually released in early 1968. See this news item in Billboard.