Art-From Soul To Psych Out 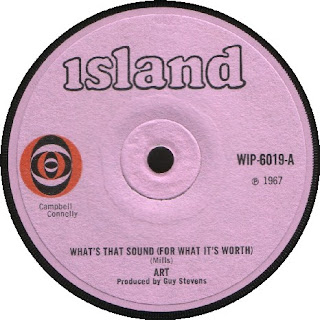 ART-What's That Sound (For What It's Worth)/Rome Take Away Three U.K. Island WIP-6019 1967
Mutating out of the hot U.K. r&b combo The V.I.P.'s (see September 1, 2010 entry on The V.I.P.'s), Art were a brief stepping stone before the band became Spooky Tooth. Best known for their psychedelic Island LP "Supernatural Fairy Tales" this was their sole 45.
"What's That Sound (For What It's Worth)" is an interesting cover of Buffalo Springfield's "For What It's Worth" with some soulful lead vocals by Mike Harrison, a heavy main riff and these bluesy licks that wouldn't sound out of place in the Jeff Beck era Yardbirds.  The real treat is the B-side "Rome Take Away Three", a group original.  It's more r&b than the A-side and built around a very heavy riff that has a nice freakbeat edge to it with some off key backing vocals.  Both sides were produced by the legendary Guy Stevens (see September 1st, 2010 entry "10 Britons You Should Investigate").

I'm not sure if either track has been reissued.  Their debut LP's CD reissue has long been out of print so I'm not certain if it was tacked on as bonus cuts and Island chose their albums title track to represent the band on their "1967-1972" CD retrospective not either of these sides.
Hear "What's That Sound (For What It's Worth)":
http://www.youtube.com/watch?v=K_Mh96xYt8w
Hear "Rome Take Away Three":
http://www.youtube.com/watch?v=9DBG3SQG-fI
By Wilthomer - September 13, 2010