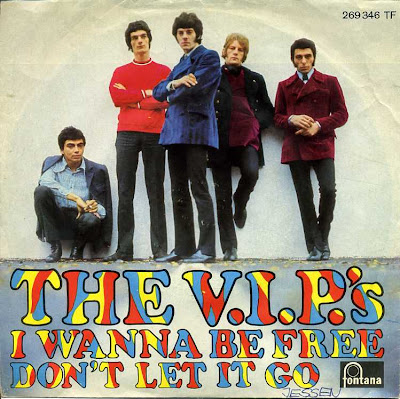 The V.I.P.'s were a British 60's r&b band who had a few singles released in their home nation but were far more prolific "on the Continent", specifically Germany and France (where they had a staggering four E.P.'s released, all of which are worth a pretty Euro these days). The line up for this 45 was: Mike Harrison (lead vocals), Jim Henshaw (lead guitar), Frank Keyon (rhythm guitar), Greg Ridley (bass later to join Humble Pie) and Walter Johnstone (drums).

This was a German pressing (it was released on Chris Blackwell's Island label back in the U.K.) and was also produced by Blackwell.  The band's weak point was that they were essentially a covers band, but their strongest point was that that had a fine soulful vocalist in the form of Mike Harrison.  Their verson of Joe Tex's Dial single "I Wanna Be Free" is carried on the strength of Harrison's voice.  Whereas the Tex original is more uptempo soul backed by horns and thoroughly dance floor friendly, The V.I.P.'s slow it down, strip it down and turn it into a blues number.  Harrison wails like  he was born to sing the blues and Henshaw's guitar solo is the proverbial cherry on top.  In my book this blows the original away by a longshot.  The flipside, "Don't Let It Go" is more of a soul number, though I'm not familiar with the original I'm sure it's a cover.  It's equally slow but less bluesy, more of a belter and I can easily imagine Bobby "Blue" Bland doing something like this.

The band's members changed (at one point Keith Emerson joined them) and they made a few more singles until 1967 when they mutated into the psychedelic band Art, who cut a one single (more on that in another post) and an LP for Island called "Supernatural Fairytales" before morphing into Spooky Tooth. There was a V.I.P.'s CD compilation out in the U.K. called "The Singles" but it has since gone out of print.

Spooky Tooth's On Love has one of the best intros going - rusty guitar riffs into a stomping rhythm section. Must replace my worn out copy some time.