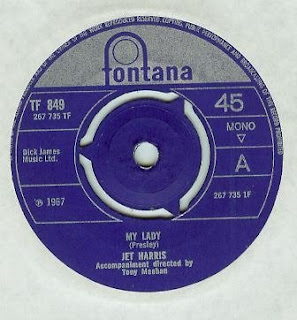 
Now we're onto something so positively weird: when a has been early 60's British rock n' roll figure does a one off weird freakbeat record. Moody looking bassist Jet Harris left The Shadows in 1962 to do his own thing with fellow Shad Tony Meehan as a duo. They had a few hit records in '63 but Jet's career took a turn for the worst when he wound up in a nasty car accident with his piece on the side, singer Billie Davis (he was married at the time) where he suffered some severe head injuries which kept him out of work for awhile. By 1964 Merseybeat and r&b had all but annihilated instrumental acts in the charts and the singles stopped coming and he was out of the news. He was allegedly slated to play bass in the Jeff Beck Group, where it was reported he'd been sacked for his drinking problem.

In 1967 he bounced back with this interesting choice, produced and arranged by his old pal Tony Meehan (not Reg Presley as it's often been suggested, unless he went uncredited). It's an odd choice as there aren't a large number of Trogg's tunes that were released as A-Sides. But it works. It's much faster than The Trogg's version and Jet's phrasing is amusingly overdone by drawling the last syllable the last word of each verse; "my lady owns and oil welllllllla", don't get me wrong he's actually got a decent set of pipe's for a guy who made a career of playing instrumentals. What makes it really cool is instead of the weird recorder on The Trogg's take this one has a flute and some wigged out guitar worthy of a Joe Meek record AND a full brass section. It's all capped off by some echoey-psychedelic sound affects that close the number. It's easily WAY better than the original. The flip "You Don't Live Twice" is more of a crooner type number but it's backed by some cool horns that descend with the number (and play snippets of the "My Girl" riff at one point), there's some Floyd Cramer-esque piano thrown in and like on the A-side Jet's voice isn't bad at all! Both sides were well put together by Meehan but sadly the record went nowhere and this was Jet's last major label release ever.

"My Lady" cropped up on a bootleg CD compilation "Justifixation" several years back, but the flip has eluded compilers, for now.