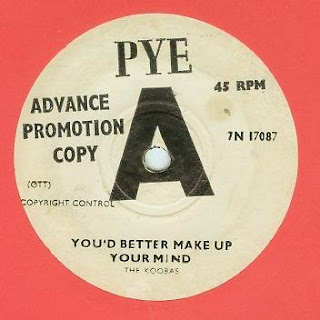 The Koobas ( Stu Leathwood-vocals/rhythm guitar, Roy Morris-guitar, Keith Ellis-bass and Tony O'Reilly-drums)were from Liverpool. They were previously known as "The Kubas" and had a cut on the "Ferry Cross the Mersey" film soundtrack (but were sadly not in the film) before dropping the "u" and adding "oo" to their name. They were managed by Tony Stratton-Smith, who also managed the Creation. They'd cut one beat single as The Kubas ("I Love Her/Magic Potion" on Columbia DB 7451 in January 1965) before moving on to Pye records. Their first offering on Pye as The Kooba's was a competent version of Evie Sand's soul ballad "Take Me For A Little While" b/w "Somewhere In The Night" Pye 7N 17012 in December of 1965 (with numerous non-U.K. picture sleeves for the 45 showing the band in their black shirts and floral hipsters, including one in the U.S. on Kapp). Never commercially successful, the band had a somewhat decent following on the Continent (like most of the best 60's U.K. unsung heroes who never had a chart hit). 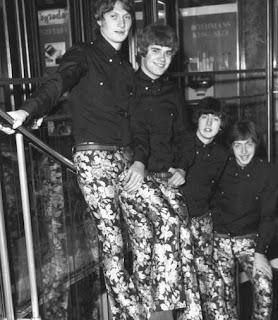 Their second single for Pye (and their final before moving onto Columbia for the next two final years of their career) was more interesting. Arriving in April of 1966 it coupled a cover of the Brooks O'Dell soul heart breaker "You'd Better Make Up Your Mind" with an original "A Place I Know", written by Leathwood and Ellis on the flip. Usually U.K. soul covers can go either way: lame (listen to any Keith Powell soul cover) or good (like, The Action!). By now The Koobas had shifted from a beat group to more of a mod/freakbeat type band with far more soul covers and guts to their music and period pics show them in patterned trousers and stripey sweaters/tennis shirts with center parted hair and onstage with Rickenbacker guitars. Their cover choice was fairly obscure and they made it their own by throwing in some fuzz guitar to play the original versions horn section's melody line. This earns it the "freakbeat" tag and vocalist Stu Leathwood's pipes are nice and strong but solemn enough to pull this one off perfectly. Truth be told I'd heard The Koobas version a good 15 years before the original! Flip it over and you've got a mid-tempo "mod" dancer with lots of lyrics about grooving, cool places and the like. It's accented by some high backing vocals and a funky beat and is a taste of the brilliant original material the band would soon be relying on over the next two years. There are two seperate appearances of the band on TV in Germany on "Beat Beat Beat" performing it live in November 1965 and September 1966 respectively! 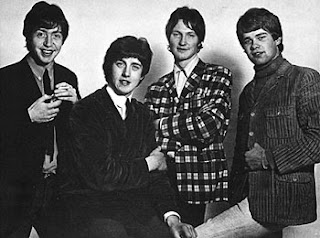 "You Better Make Up Your Mind":

Hi,Koobas version has been a fave of mine for the last 25 years, actually it belongs in my all-tyme-fave UK Top 5 list. Only recently i´ve heard the orig. Brooks O´Dell version and i love it. All the best, JJ/Sweden

I just go redirected here from a message i got on my blog where I posted The Koobas last year.
For those interested you'll also find a homemade comp on the Chilean 60s Beat Groups that include a cover of You'd Better Make Up Your Mind!
Which is quite curious!