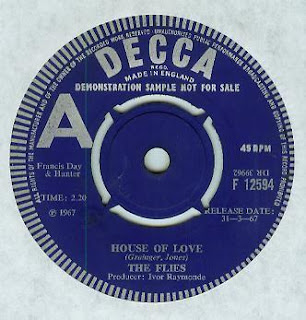 One of the many joys of Bam Caruso records "Rubble" series is it introduced me to new bands I'd never heard of and furthered my listening experience for bands I'd heard other stuff by. I'd been familiar with The Flie's from their searing fuzzed out cover of The Monkees "(I'm Not Your) Stepping Stone" from "The Great British Psychedelic Trip" LP. I purchased Bam Caruso's "Electric Crayon Set: Rubble Volume Five" and among the many groovy tracks was "House Of Love" by The Flies. Years later I actually found a 45 of it!

Flash back to the Melody Bar in New Brunswick, NJ in 1998, I'm spinning 45's with my pal Scott Belsky at our monthly DJ night "Hub City Soul". I decided to give one of my new purchases a test run on the crowd, who liked to dance. I'd always mixed up U.K. 60's soulful tinged stuff amongst the standard fare of U.S. 60's soul with pretty good results (The Quik, George Fame, The Action, The Nite People etc). Luckily for me the moment the needle hit the grooves on "House Of Love" the floor stayed packed and month after month it became my standard and a favorite of our faithful punters. Banish all thoughts of the same band who cut the mind melting freakbeat insanity that is/was their version of "(I'm Not Your) Stepping Stone", this is something slightly different. Opening with pounding bass and sneering vocals "House Of Love" might not seem like a dancefloor groover but once it all falls into place with organ and high soulful backing vocals complete with "call and response" it is, as one man said, "a stone gass". The flip is dreadful, like so many U.K. 60's classics (ie Carnaby's "Jump and Dance") the B-side here makes you think two things; 1.) Is this even the same band? and 2.) Why did the back such a monster cut with such a lame track?

Luckily those of you who are interested can still get it on The Flies "The Complete Collection 1965-1968" CD or Bam Caruso's "Electric Crayon Set: Rubble Vol. Five".

Hear "The House Of Love": 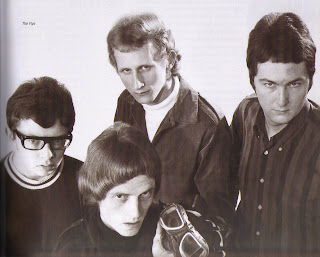