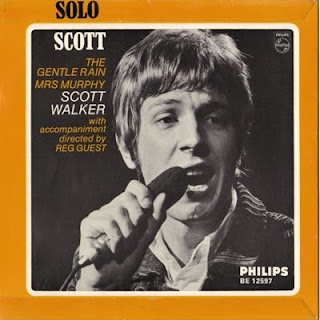 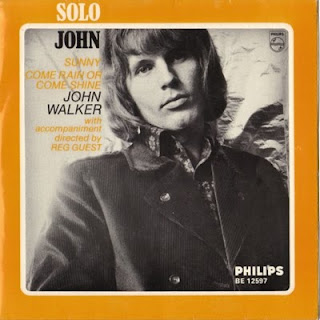 On a recent trip I scored a few 45's, this being one of them. Yes I don't buy vinyl anymore but there's always something fun in my Lisbon record goldmine(no names, a true anorak does not publically disclose his sources). I'd recently purchased the Scott Walker U.K. DVD documentary "30th Century Man" from Amazon.co.uk (which was waiting for me when I got home) and lo and behold this E.P. gets a mention in it! There's no point in running down any Walker Brothers history, anyone who knows about them will tell you Scott was the talented one. Scott gets the fame thanks to his solo career, Gary gets heavy duty street cred with me because of his amazing post-Walkers freakbeat band Gary Walker & The Rain (responsibile for an amazing but horribly rare Japanese only LP "Album No.1" and some equally cool 45's) and then there's John. What's John known for? Not being as talented.

This E.P. was no doubt in some small way responsible for the rift in the band that led to their split right after their 3rd LP "Images". It's pretty much a given that Scott had the better voice of the three Walkers so it was a severe shot in the foot by whoever had decided that two Walkers be given separate billing on an E.P. Scott had just returned from the Quarr Monastery (where the press stated he'd gone to escape the pressures of life, Walker later stated in an interview a few years back that he'd gone there to learn Gregorian chants) and had been writing material which little by little was gaining a foothold in a band largely reliant on other's compositions. This E.P. would unveil one of his best Walker's tracks that was a window into his signature compositions on his four solo Lp's.

John Maus's (nee Walker) opening E.P. cut, a version of Bobby Hebb's "Sunny" is pointless. The original (as well as a cover by Georgie Fame) were both previously U.K. hits. In fact Fame's version had just reached it's top position (#11) on the U.K. charts a few weeks before this E.P hit the streets. Maus's reading is bland and listless. It's only noteworthy item is the James Bond "007" melody/lick added after the main chorus. His other contribution, the lushly orchestrated "Come Rain Or Come Shine" is not so much as terrible, it's just god awful boring MOR crooner material and it's not helped by his vocal inability. Scott Engel's (nee Walker) contributions are FAR more noteworthy. To be fair and quite perfectly honest, Scott's first cut "The Gentle Rain" is equally boring MOR crooner pap despite sweeping strings (c/o the famous Reg Guest). The next and final cut of the E.P. is "Mrs. Murphy", a Scott Engel original which is well worth the price and sits as the crown jewel on this otherwise lackluster MOR E.P. It's spine tingling intro and sombre strings/woodwind backing is downright brilliant (akin to something on David Bowie's debut LP) with the trademark Walker Brother's Spector-esque tambourine, drums and bass thundering in after the first verse. The lyrics are akin to the social observations that would appear on his later solo work like "Montague Terrace" or "The Amorous Humphrey Plugg". "Mrs. Murphy" is lyrically snippets of apartment building gossip between tenants Mrs. Murphy and Mr. Wilson in a bleak style that evokes British b&w kitchen sink dramas like "A Taste Of Honey" complete with a married woman's (Mrs. Johnson) baby borne by a young man in the building ("poor Mr. Johnson being married to a wife who should be caged, it's the child who will suffer and to think that young man is half her age..."), a relationship that continues after the baby's birth as the last line betrays. Gritty stuff for 1966 England, especially from a band/artist who's audience were screaming teenyboppers more interested in grabbing a hunk or their hair or a scrap of the clothes than actually listening to the lyrics, an issue that would plague Mr. Engel through to his solo career.


All four E.P. cuts appears as bonus tracks on the Phillips reissue CD of the Walker Brothers LP "Portrait".