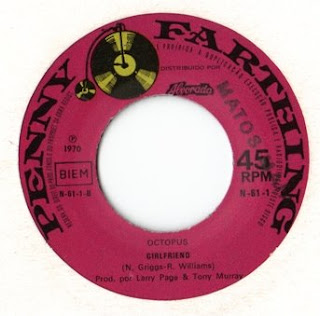 
Don't let the year "1970" fool you, there are plenty of good U.K. psych/pop 45's out there that sound like 1967. "Laugh At The Poor Man"/"Girlfriend" by Octopus is a perfect example. This was their first single and it appeared on Larry Page's newly launched Penny Farthing label (as PF 705 in the U.K.). The label featured a number of obscure acts and names but did introduce the U.K. to the Dutch act Shocking Blue as well as being a home for talented vocalist Samantha Jones. The single even got a release in Portugal where I scored my copy a few weeks ago, which is somewhat interesting as most Portuguese pressings of British records at that time came from hitmakers, making the debut recording of the relatively obscure Octopus a startling find! I recently heard from the band's guitarist Paul Griggs who tells me the band made a special trip to Portugal (with Samantha Jones) to promote the 45!
Octopus were formerly known as The Cortinas, who released one 45 on Polydor 56255 in 1968 called "Phoebes Flower Shop"(which popped up on the Strange Things Are Happening's "Circus Days Vol.5" CD) . At the time of the debut Octopus 45 the group were: Paul Griggs-vocals/guitars, Rick Williams-guitar, Nigel Griggs-bass(later to join Split Enz) and Brian Glasscock-drums.

"Girlfriend" is a perfect pop record. It's well produced and it's got these three tier harmonies that remind me of the first few Marmalade 45's (before they got crappy and began doing all those dreadful Macaulay-McLeod MOR pop pap numbers). The lyrics boast an amusing line (very obviously pre-sexual revolution) "and my wife, stays at home and works around the house all day" whilst being introspective from the point of view of a happily married man ("thinking back again I can remember very well, the girls I knew, the jukebox songs, the stories I can tell..."). The A-side, "Laugh at The Poor Man" is a bit more wiggy thanks to some wobbly phlanging on the guitar intro but equally entertaining. It almost reminds me of early Badfinger with a slight psychedelic tinge. Both tracks were produced by Larry Page and former Plastic Penny(then Troggs) bassist Tony Murray and are available as bonus cuts on the CD reissue of the band's hideously rare debut LP. Octopus went on to cut another single The River/ The Thief (Penny Farthing PEN 716) before issuing the previously mentioned LP.

Get the full story on Octopus at:

And Paul Griggs book at:

Hear "Laugh At The Poor Man":