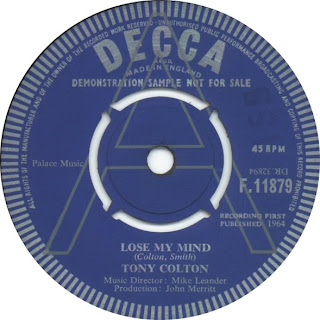 Here kids we have a debut 45 by the legendary U.K. singer/song writer Tony Colton (whom with Ray Smith was responsible for writing such tracks as Zoot Money's "Big Time Operator", The Shotgun Express "I Could Feel The Whole World Turn 'Round" and The Merseybeat's "I Stand Accused", among others).  Tony is best known for his 3 hard hitting r&b 45's on Pye, but before those he released a solitary 7" on Decca.

Like many other subsequent releases Tony's vocals are a perfect blend of British 60's beat and the Mose Allison/King pleasure inspired tones of Georgie Fame.  "Lose My Mind" is a perfect example of this sort of thing and the caterwauling of The Breakaways (presumably) on backing vocals (they sang on early Georgie Fame releases) drive Georgie Fame comparison home.  And yes there's a groovy little Animal's style organ solo.  The number has a "call and response" feel to it and reminds me of 60's British beat groups like The Zephyrs or The Untamed who were adept at playing r&b as well. I can't for the life of me tell you what the flip is like, apologies! 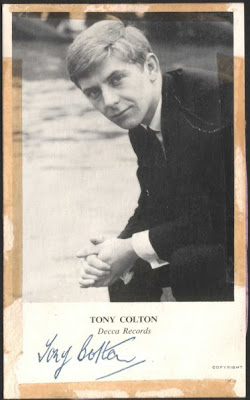 "Lose My Mind" has been reissued on the CD compilation "New Rubble Volume Three: Watch Your Step".
Hear "Lose My Mind":
http://www.youtube.com/watch?v=HZE0zCaffC4
By Wilthomer - November 30, 2010