Can You See The Real Me Before I Get Tired And Old:The Who Live 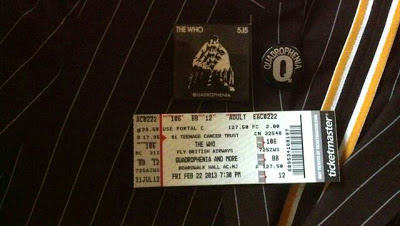 I had struggled with going to see The Who's several month long U.S. tour of their "Quadrophenia" LP since it was first announced and I got a gander at the ticket prices.  I mused that I'd rather spend the money on the Action book (which was actually more than an individual ticket for the gig we attended).  The price seemed outrageous, the possibility that they were "tired" and "played out" seemed equally possible, I hate the atmosphere of "stadium rock" (especially the corny sing alongs and proles who carry on like it's a religious rite) and none of these prospects filled me with enthusiasm. Reviews from people I knew varied.  The sheep all loved it, my hardcore Who fan pals, were more cautious (by the way Johnny Bluesman I'm still waiting for that phone call on how the gig was before we committed to buying tickets!). Luckily they were playing so many dates that my malaise, indifference and downright laziness did not get in the way of date availability (they'd played on the East Coast in November already and were back again) and my thoughtful wife dutifully scored us tickets for a date in Atlantic City , NJ, the East Coast answer to Las Vegas. Like Las Vegas it's the biggest gathering point of douche bags and ill mannered sorts and a perfect place for a late night sweep to cleanse the nation of it's worst citizens in one fell swoop (vote for ME!). My wife summed our seats up perfectly: "they're not in the nosebleed section but we're not at the front of the stage either".  Thanks to the two jumbo tron monitors to the left and right of the stage we got a perfect view of Roger's abs and Pete's almost complete metamorphosis into Donald Pleasance and the sound was perfect and so was the view. We settled into our seats to the left side of the stage. Dead ahead of us was the soundboard. With the sound crew I noticed a hardcase looking bald man in a black crew neck and was staring at him as he looked really familiar  As his eyes met my glance I realized I was eye to eye with Bill Curbishly, one time Shepherd's Bush mod/hard nut and long time Who road manager....I smiled. He didn't smile back right away till he clocked me.

The band played the entire LP in it's running order with three overhead circular screens above the stage (scooter lamps actually) where they projected a host of wiggy old clips of the 60's (mods, Brighton pier, themselves in various 60's/mod points of their career).  After awhile the video screen images got pretty lame.  If they'd kept it at the subject matter concerning the LP it would've been fine but when they veered off to Vietnam, various American shithead politicians, Maggie Thatcher, 9/11, the Occupy lefties etc I thought it was a bit too pretentiously indulgent.  Though there was a powerful scene during "Love Reign O'er Me" of Brighton's West Pier engulfed in flames which was pretty spooky.  Rather than give you a track by track run down I've just written it all the way I;m recalling it, little images and bits that remain in my shoddy memory......

When the lights went dim and the scooter lamp screens projected lapping waves and the sound of them came mixed as strains of my fave Who track "The Kids Are Alright" echoed through the cavernous auditorium the stage was set for the inevitable bellow of "Can you see the real me can you? Can you?" it kicked off with 'The Real Me" and it's punchy brass and funky bass lines. The band were tight as hell there was no doubting that. Sadly Roger's voice can't hit the notes he used to so everything was delivered deeper and more than once I noticed him pull the mike away from his mouth when the chance appeared that he might just not hit that note.  At times it was like watching your fave footballer try to get the ball and score that last winning goal before retiring and instead he's mid field gasping for air.  Pete's voice is no better, in fact at times he sounded like Red Foxx ("But I'm one ya big dummy.."?). I'm also thinking that since this show has been on the road so long that maybe Roger and Pete's voices may have suffered from doing this several times a week? But I think maybe I'm making excuses. Pete helped out by singing "Drowned" and his brother Simon (on hand as second guitar) took the lead of "The Dirty Jobs" (where he switched the first and second verses). Pete played "I'm One" on his own under a white spotlight.  His voice was raw and haggard but he delivered it with conviction. On "Helpless Dancer" Pete refrained from singing the line "just like the lesbians and queers" instead pointing to the audience for some reason, whether it was an attempt at being "P.C." or a bit for audience participation I'll never know, or maybe he just couldn't hit that note. For "Bell Boy" they showed footage of Moon singing the track live with the audio of the original vocal track.  As I'm down on backing tapes I'll make an exemption and state it was better than some guest clown coming up and doing it. And while we are on the subject on Mr  Moon let me state emphatically that Zak Starkey WAS the engine that drove The Who that night.  Moon's shoes aren't easy to fill (ask Kenny Jones) but he did an admirable job by rather than replicating Moon's drum bits note by note he cleaned them up in my estimation by adding his own style (I've always thought Moon's drumming was sloppy by the time "Quad" rolled around). And he looked pretty cool in a burgundy button up with white cuffs and collar like his old man wore in'65/'66 (and sported a cool pair of burgundy Tartan trou as well).  John Entwistle too came back from the dead on the jumbo tron for a 40 minute bass solo on a tune called "5:15" which was clearly NOT the length of the tune or his bass solo. The two man brass section were my faves, especially during the instrumentals "The Rock" and "Quadrophenia" (equally powerful on "5:15") which literally made the hairs on my legs and neck stand on end. But there was plenty of typical rock n' roll wankery.  The WAY too long guitar solos on "I've Had Enough" and "Love Reign O'er Me" being primary examples of why this thing is a joke that I've never gotten or found funny, the microphone swinging, no smashing guitars though......

After they finished "Quadrophenia" they played all the usual Who hit garbage: "Who Are You", "Baba O'Reilly", and a few more "hits"(ie lameness) prompting a big audience singalong, though I'd actually been serenaded all night long as the cow next to me caterwauled along with ever song on top of her lungs in my ear in between repeated "wooooo"'s and yelling "Pete" (even funnier during Moonie's "vocal spot" she kept yelling "Keith!" on top of her lungs). They closed with "Tea And Theater" and I got a chuckle when Roger repeatedly told the audience to "shut the fuck up" as the howls threatened to drown out Pete's acoustic guitar he smiled the first time he said it but by he second time he had to utter it he was clearly NOT pleased and added "You take the time to listen you should take the time to learn as well".  I couldn't agree more with the man...After the show we walked back down the boardwalk to our hotel with a slight mist rolling in off the sea on the wet planks with the waves crashing in the distance and past the remains of the Hurricane Sandy ravaged Steel Pier and I swore I could hear a trumpet playing out in the distance....

Slagging The Who off is like talking shit about an old friend you've been through thick and thin with.  They come out and give you 101% and no one will deny their generosity with an all proceeds benefit going for cancer research this Thursday night with Elvis Costello and The Attractions at Madison Square Garden among other admirable fund raising events they've been a part of.  But like any relationship with an old friend you've got to be honest and the time has come for me to say to The Who, it's time to chuck it in. It's long overdue and it's getting embarassing.
And to quote The Jam "but didn't we have a nice time? Wasn't it such a fine time?"

Difficult to argue too strongly against that. One thing I thought when I saw them do Quadrophenia the other year is the album doesn't really work live, insofar as there aren't enough BIG numbers (beyond 5.15, Love Reign and maybe The Real Me). Also it is unreasonable to expect Roger to have the power of a young man any more but he works it well within his own limitations. And as for "usual Who hit garbage"... Well!

Different experience for me in Vegas, but that could be due to a couple of things: 1. it was my first time actually ever catching the Who live and 2. my expectations were pretty low at first.

Like you, I was tired of the mod army gushing over this tour. I always have to take that stuff with a grain of salt. But, as soon as that opening hit, well... my Manchurian Candidate mod brainwashing kicked in and I was into it!

But yeah... I don't think I need to catch them again if they re-do the tour. I'm happy with what I got.