Ode To A Footballer


Today's piece is perhaps the first rock n' roll record to ever mention a football player by name (that's soccer to the rest of my countrymen who are not as pretentiously Anglocentric as me). Of course we are discounting  Monkeypick's main man's QPR Supporters 45.  Cut by former Sorrows front man Don Fardon (responsible for the world's first airing of J.D. Loudermilk's "(The Lament Of The Cherokee) Indian Reservation" in April 1967) it was his 8th solo 45 being released in the U.K. on the Youngblood label in April 1970 (YB 1010). It featured, as the label indicates, in a B.B.C. documentary "The World of Georgie Best".

Written by our "Anorak Thing" songwriting champions Tony Colton and Ray Smith (the men behind fave tunes here by The Shotgun Express, Danatlian's Chariot , The Merseybeats, Thane Russal and Zoot Money's Big Roll Band, to name but a few)with help from Johnny Harris. It's a decidedly 70's record with it's cheezy porn film Moog, which is luckily aided by some groovy phlanged piano and Fardon's soulful voice.  The lyrics themselves are prophetic about Best's meteoric rise (and fall, which of course no one had any way of knowing in 1970 when this song was released and he was still a "star"):

It's easy to see how this track became so popular because it's so infectious and certainly must have been a rousing anthem for his legion of fans. It's also a swan song of sorts as Best's career on the pitch was never again as big as it was in the 60's, or so my footie mad Man U. pals tell me.....don't ask me I don't know shit about football.

The B-side "Echoes Of Cheers" is not, as the title might suggest another stomping terrace anthem like the A-side. Written by the same composers of the a-side it's a moody ballad that's fairly devoid of any soul and is sort of indicative of a lot of the crooner type tunes Fardon would cut in the 70's. It's not painful, but you won't play it as many times as the A-side that's for sure! 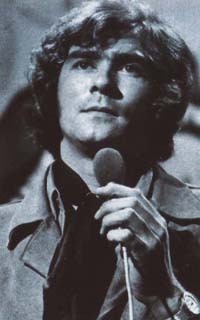 TRIVIA:
Back in the late 80's when I was Sorrows mad I found a sealed Canadian copy of Fardon's LP "Belfast Boy"  (which also contained his MONSTER version of Tommy James "I'm Alive").  I didn't dig it. Like a total tool I sold it on E-Bay in the late 90's.  D'oh!

Great track. Didn't know about that "I've Paid My Dues" album until a few years back, was glad to find it for cheap. Great stuff!