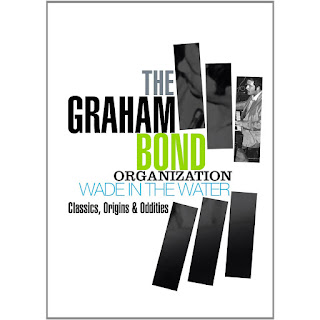 For well over a decade there has been talk of the plethora of unreleased Graham Bond Organization material existing in the vaults.  At the  of 2012 it was announced that Germany's Repertoire Records would be issuing a 4 CD G.B.O. box set "Wade In The Water: Classics, Origins & Oddities" which I duly advanced ordered (and you can order it here).  No stone has been left unturned (though the oft reissued spotty sounding "Live At Klook's Kleek" set is conspicuously absent from the package). Rather than give you a track by track review I thought I'd go through some of the highlights.

DISC ONE:
Some of the more interesting aspects of Disc One are records The Graham Bond Quartet/Organization made with other artists. Seven tracks recorded in a session backing Duffy Power (for what would be the band's debut vinyl appearance backing him, which we profiled here) are included.  The band (as The G.B.'s) next backed Jamaican guitarist Ernest Ranglin on a rare as hell jazzy 45 on the Black Swan label and seven tracks with Ranglin are also included. I'd long expected them to be ska flavored as Ranglin made some ska records and Black Swan was predominantly a ska label but they are far from, coming across as Wes Montgomery jamming with Jimmy Smith. Also included are several songs recorded under the moniker of The Graham Bond Quartet (including their EMI audition session including "Wade in The Water" which first saw the light of day on the CD "R&B At Abbey Road").

DISC TWO:
Disc two is predominantly composed of stereo mixes of tracks from the band's 1965 debut LP "The Sound of '65" (Columbia records) and tunes from their brief period on Decca records which came prior to singing on with EMI's Columbia outlet.  Among them are their sole Decca 45 "Long Tall Shorty/ b/w "Long Legged Baby", "Hoochie Coochie Man", "Little Girl" and "Strut Around" from a 1964 Decca LP compilation called "Rhythm And Blues" (which also featured the tracks on the Decca 45) and the powerful "Harmonica" from the film "Gonks Go Beat". A previously unreleased track called "What Am I Living For" from the first LP session is included along with other previous unissued tracks from '64 like "Green Onions", "Honey Bee" and a different recording of "Hi Heeled Sneakers".

DISC THREE:
Disc three contains Stereo mixes of all the tracks from their 2nd LP, 1965's "There's A Bond Between Us" as well as two songs cut backing singer Winston G. ("Please Don't Say" and "Like A Baby", Winston's debut 45). Unlike other Winston G. tracks I've heard these are dead boring. Disc three also houses my all time favorite G.B.O. single, April 1965's "Tell Me (I'm Gonna Love Again") b/w "Love Comes Shining Through".  There are a slew of unreleased tracks on disc three  (six actually) including Ginger Baker's first recorded original, the brilliant "Cold Rain" (featuring Graham Bond on Mellotron, an instrument the G.B.O. used frequently) which sounds like an autobiography of a junkie. The disc concludes with their powerful dirge "St. James Infirmary" (you can read about the U.S. pressing here).

DISC FOUR:
Disc four starts out with the last G.B.O. Columbia 45 ("Soul Tango" b/w "Wade In The Water", a different take than the U.S. 45 version that also previously graced the "Sound of '65" LP). It also contains their amazing B-side recorded as "The Who Orchestra" for The Who's "Substitute" single. There's the band's final 45 for Page One in '67 ("You Gotta Have Love Babe" b/w "I Love You", with an alternate mix of the former as well).  The disc is rounded out by a slew of live cuts of varying degrees of quality, most are interesting only for the sake of historical posterity and in my book don't warrant too many repeated listenings. 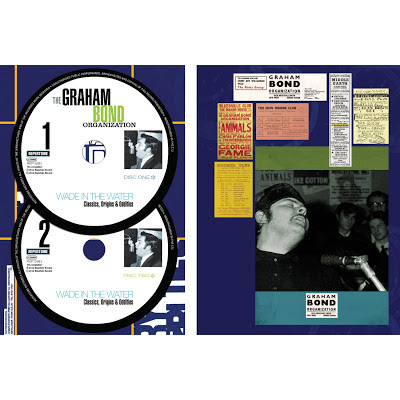 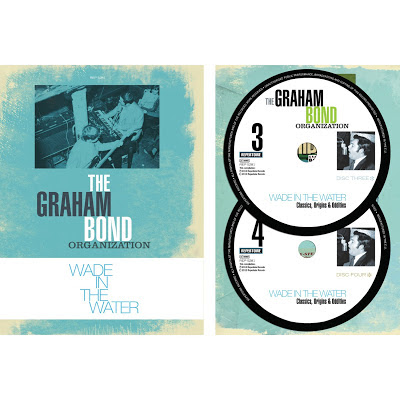 THE GRAHAM BOND BOOK:
Harry Shapiro's 1992 Graham Bond book, "The Mighty Shadow" is available again after long being out of print and is for sale by the author at Amazon.co.uk by going here. I was fortunate enough to score a copy and Harry kindly inscribed it to me.  After seeking the book since 1992 when Midnight Records advertised it (and never stocked it) to say I'm pleased is an understatement!

Got this after your previous tip-off. I think this review actually under-sells it. Tremendous stuff.