I'm the king of making myself playlists, for entertaining, for the gym, for listening in the car etc.  They often have a theme.  To inaugurate the first of what I hope will be many playlists here I've started off with one that I made awhile ago with various artists doing tracks from The Beatle's "Revolver" LP in the album's original running order. 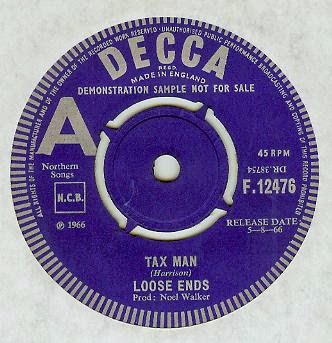 1. THE LOOSE ENDS-"Taxman"
Funky bongos, go-go organ, cowbell and a groove that seethes London 1966, The Loose End's version was released cannily on August 5th , the same day as the "Revolver" LP and "Disc & Music Echo" reported that the band presented a copy to Edward Heath at No. 10 Downing Street. Sadly no pictures exist to corroborate that claim!

Hear it on: "The Freakbeat Scene" CD Deram/Decca

2. THE ELIMINATORS-"Eleanor Rigby"
From their 1966 Pye LP "Guitars And Percussion" (NPL 18160) of instrumental treatments of  60's pop classics like this take on "Eleanor Ribgy". It breaks from the typical Shadows instrumental mold care of some nice volume pedal work on the guitar with a wiggy bossa nova feel thanks to the organ and percussion with some thundering kettle drums perfectly accenting the while thing.

Hear it on: "Instrumental Diamonds Volume 3: Out Of This World" CD Sequel

3. LOBO- "I'm On Sleeping"
Okay laugh it up back there.....done?!  Anyway mid 70's boredom merchant Lobo (real name Roland Kent LaVoie, news to me I'd wrongly assumed for the past 4 decades they were a band!) cut a decent version that was released as a B-side in 1974.  He stuck to the plan and did it pretty much like the Fab's but undercut it with some subtle strings and weird mood that really makes it sort of dreamy AND lysergic. See there was life after "Me And You And A Dog Named Boo"!

Hear it on: "Just A Singer" CD Rhino/Atlantic

4.CORNERSHOP-"Love You Too"
Cornershop were one of those bands everyone beat me to death with in the 90's that sent me heading to the hills and my U.K. 60's freakbeat 45's.  One day in a Starbucks I heard this wiggy version of "Love you Too" and lo and behold thanks to Shazam it was Cornershop. It's pretty much just a modern note for note cover of the original but actually works.  If it ain't broke....

Hear it on; Cornershop "Something Makes You Feel Like" CD Ample Play Recordings

5. EPISODE SIX-"Here There Everywhere"
Easily trumping The Fourmost's version (which was released on....Agust 5th, 1966) the Episode Six version was launched a few weeks later (August 19th to be precise). Sticking to a light arrangement with some subtle organ it's carried by the band's harmonies led by the lead vocals of a young Ian Gillian before he became a headbanger.

Hear it on: "The Roots of Deep Purple: The Complete Episode Six" CD Sequel

6. THE SHE TRINITY-"Yellow Submarine"
U.K. female group The She Trinity crash into a Mickie Most produced cash-in unleashed on August 19, 1966.  It has a raw feel not at all unlike a  Delmonas/Headcoatees record accented by a brief bash of "Louie Louie" after the line "and the band begins to play" and a sketch comedy bit where the Beatles are sighted through the periscope and predictable female Beatlemaniac hysteria ensures. This record is dying for a reissue somewhere!

7. THE CHORDS-"She Said She Said"
'79 mod heroes The Chord's show they're not afraid to love the Fab Four on their debut 1980 LP "So Far Away" (Polydor POLS 1019) .  It's sort of pedestrian at times but works because they have a punky little bash at it and in the last 30 seconds offer a wonderful cross of harmonies meets football terrace chanting!

Hear it on: "So Far Away" CD Captain Mod

8. ROY REDMOND-"Good Day Sunshine"
This Jerry Ragovoy produced 1968 version  cut by one Roy Redmond has an incredible Wilson Pickett feel to it from the punchy brass and groovy female backing vocals to Redmond's powerful voice this will easily make you forget the abomination that was cut by The Eyes two years prior.

Hear it on: "The Best of Loma Records: The Rise And Fall Of A 1960's Soul Label" CD Warner Brothers 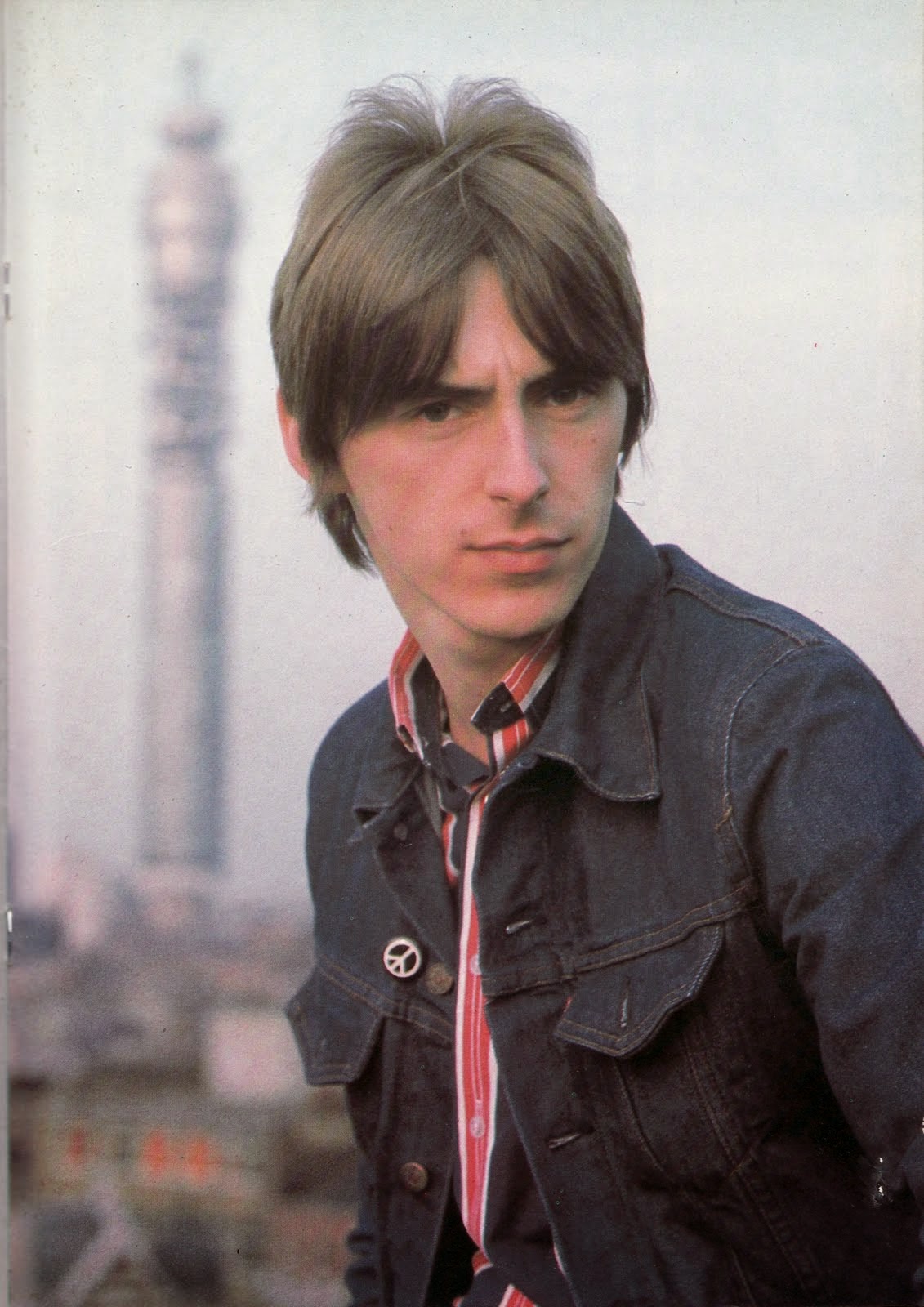 9. THE JAM-"And Your Bird Can Sing"
Not really the Jam but from what I recall it's Paul Weller and then Jam producer Peter Wilson horsing about it the studio where they cut a few covers.  It's not great but it is interesting to hear the Jam/Paul Weller do a Beatles cover before "Come Together".  The organ playing along with the main riff makes a bit more interesting as well. Next...

Hear it on: The Jam-"Extras" CD Polydor

10. CILLA BLACK-"For No One"
Issued as the October 1966 flip to "A Fool I Am (Dimello Parlami)" (Parlophone R5515) good old Cilla could always count on a Fab Four track or two thanks to their old association and sharing the same manager in  Brian Epstein. Cilla's voice is shrill at times. The saving grace is George Martin's stellar arrangement featuring a very regal sounding trumpet (that sounds better than the original version's).

11. PLUME-"Doctor Robert"
Here's an interesting one.  A Canadian single from 1967 sung in French.  It sticks to the Fab's original arrangement though it's sped up a bit it's damned interesting as, well you don't get to come across many 60's Beatles tracks in other languages.

12. THE LAMBRETTAS-"I Want To Tell You"
More '79 mods....from the Lambretta's 1981 second LP "Ambiance" recorded after they had shed their suits and parkas. The band confidently and competently handle George's original with gusto and aplomb, a true gem on an album otherwise lost in a jazz chorus effect/Police-aping mess.

Hear it on: "D-a-a-a-ance: The Anthology" CD Sanctuary 13. CLIFF BENNETT & THE REBEL ROUSERS-"Got To Get You Into My Life"
Another August 5th release.  This one actually charted in England (#6!). Recorded in July 1966 at EMI'S Abbey Road Studio 3 it was produced by David Paramor and Paul McCartney (though uncredited on the 45 label). It's a tour de force testament to the powerful soulful vocals of Cliff Bennett and the stellar ability of the Rebel Rousers brass section (Moss Groves and Sid Phillips) that is beyond any shadow of a doubt the best "Revolver" cover version out there.

14. THE MIRAGE-"Tomorrow Never Knows"
Freakbeat/proto psych act The Mirage took a chance and released this as an A-side in December '66 (Phillips BF 1534) where it promptly sank without a trace (backed by the solid mod/freakbeat "You Can't Be Serious" which should've been the A-side).  Instead of carbon copying the Fab's I have to give them credit by making it their own by speeding it up and adding an almost Who-feel to it with droning feedback that gives it a trippy feel.

Cheers Ady, we try our best!