10 More Jazz/R&B Tunes You Must Hear

All tracks US releases unless otherwise noted. 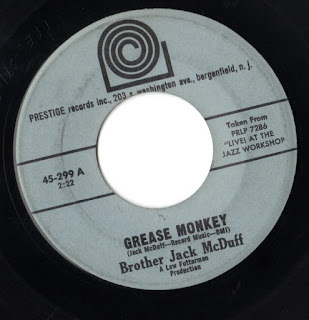 1. BROTHER JACK McDUFF-"Grease Monkey" Prestige 45-299 1964
Picking just one Jack McDuff number is no easy task as there are loads to choose from. This live track culled from the stellar "Brother Jack At The Jazz Workshop. Live!" and is helped in no small part by the young George Benson on guitar and the talented Red Holloway and Harold Vick on saxophones.

2. DOLPH PRINCE-"You're Gonna Drive Me Crazy" King 45-5100 1957
Sitting in the #1 slot on my r&b 45 wants list is this slow but soulful r&b ballad that came to my attention via one of Ace's King/Federal records comps many years back (Kent's top shelf "King New Breed R&B Volume Two). It moves with some bluesy guitar, mid tempo r&b style sax/piano and a glorious mix of lead vocals and backing vocals.

3. GENE AMMONS-"My Babe" Argo 5417 1964
On the flip of "I Can't Stop Loving You" by legendary jazz reedman Gene Ammons is this kitschy, funky version of Willie Dixon's "My Babe". It's almost way out at times and just when you think it's going to far the Jug winds it back in. I suspect the organ is care of Brother Jack McDuff (who cut multiple albums with Ammons). 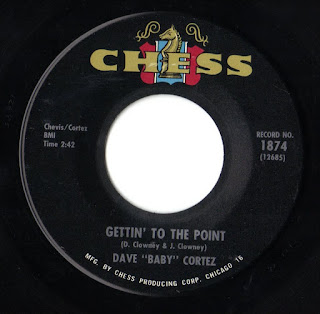 4. DAVE "BABY" CORTEZ-"Gettin' To The Point Chess 1874 1963
Tucked away on the B-side of "Happy Feet" is this wailing instrumental monster that has a rough feel like Booker T and The MG's if they gave the horns equally prominence on their .  The gritty guitar solo even has a Steve cropper twang to it.  Boss!

5. RAY BRYANT-"Shake A Lady" Sue 45-108 1964
This 1964 jazzy instrumental by Ray Bryant is built around some Ramsey Lewis style piano with just a hint of Latin percussion to carry it along. To be honest a lot of Ray Bryant stuff I've heard is good but a tad too pedestrian and nondescript at times but this tune is definitely an exception.

6. JOE SIMON-"I See Your Face" Hush G 107 1961
The first time I heard this track I thought it was Arthur Alexander, but alas it was Joe Simon.  The musical backing is a nifty little mix of flute, horns and organ giving it a mild jazzy feel but Simon's vocals are pure r&b crooner and his voice is actually not at all unlike Arthur Alexander. 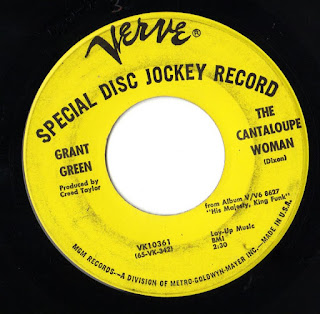 7. GRANT GREEN-"Cantaloupe Woman" Verve VK-10631 1965
Edited from the just slightly longer version on his 1965 album "His Majesty, King Funk" this jazz instrumental piece by jazz guitar legend Grant Green is spiced up by the Hammond talents of Larry Young and Harold Vick on saxs. Throw in some groovy congas and the party is in full swing!

8. WILLIE BOBO-"Fried Neckbones And Some Home Fries" Verve VK-10400 1966
My favorite Willie Bobo track is this Latin slow burner with some brilliant jazzy horns beneath the required groovy percussion and emotive shouts. It's got everything you want in a Latin jazz instrumental and much, much more with the title repeated behind it all lending an almost hypnotic feel to it all.

9. CHICO HAMILTON-"Evil Eye" Impulse 45-249 1966
My favorite jazz instrumental is probably this 1966 single by Chico Hamilton which is 99% carried by the jazzy/raga tones of the legendary guitar Gabor Szabo.  It's almost trippy (like most mid/late 60's Gabor tracks) and fades into a wonderful trance jazzy psychedelic dreamscape. 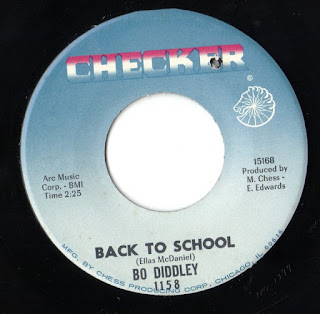 10. BO DIDDLEY-"Back To School" Checker 1158 1966
This waling Bo Diddley cut dates from 1966 and finds him using his trademark beat but injected a bit of mid 60's go-go feel wrapped around a public service announcement about staying in school.  My favorite part is when Bo ad libs "Mister D says put that transistor radio back in the drawer, you can do the boogaloo on the weekend..".