Sounds Incorporated are highly underrated in my book. They have a host of mundane instrumentals, sure, but they are also responsible for a host of groovy tracks, which believe it or not, are not as easy to lay one's hands on as one might expect. One of Britain's most interesting instrumental combos, this six piece always rode the edge of "cool" vs "MOR".  They could come off like Light Programme BBC musicians and then cook up a gritty, soulful killer in the blink of an eye. To me they were like the bastard love child of The John Barry Seven meets The Mar-Keys. Best known for backing a host of British vocalists (especially at NME poll winners concerts) they were competent artists on their own (as a foot note their horn section appeared on The Beatles "Good Morning, Good Morning"). They were: John St. John (guitar), Alan "Boots" Holmes (saxophone/flute), Barrie Cameron (organ/saxophone), Wes Hunter (bass) and Terry Fogg (drums). Fogg was later replaced by the famous session extraordinaire drummer Tony Newman. 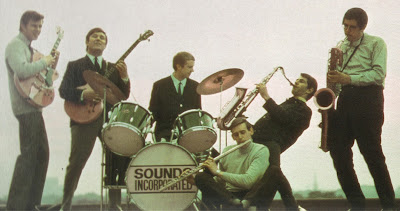 Among my favorites is today's subject, their sixth UK 45 and they very first on EMI's Columbia imprint. Their previous seven inches were on Decca, Parlophone and Capitol (Their last Decca release "Keep Moving" was produced by Joe Meek). Our subject was released the very same month that saw the infamous mods and rockers seaside battles (April 1964). "The Spartans" is a rousing instrumental led by some ethereal flute before blending with the band's ultra tight horn section. It was written by pianist Russ Conway under a pseudonym and provided the band with their highest U.K. chart placing (#30).

The flip, "Detroit", is a band original. It's a gritty duel between flute, organ, horns and twangy guitar and equally as strong as the top side and certainly more dance floor friendly as a nice melding of a Booker T & The M.G.'s style original some kitschy mid 60's Euro film incidental party music.

Both tracks are still available on an untitled See For Miles CD compilation collecting select 60's sides by them.