The advent of the British beat music boom slew the careers of lots of performers on both sides of the Atlantic be it the bryl creamed American solo performers or their British counterparts across the pond or British instrumental combos or even the 50's rock and roll legends who inspired these new upstarts.  But this boom also led to attempts to reinvigorate the stalled careers of many of these unfortunates.  Sadly none of them were resuscitated by this but it did produce some amazing tracks. 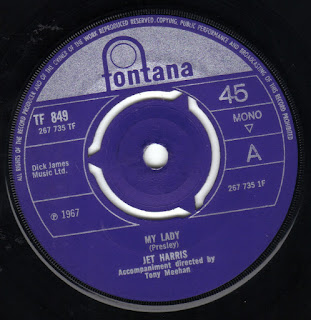 1. JET HARRIS-"My Lady" UK Fontana TF 849 1967
The musical career of ex-Shadow Jet Harris was long dead by 1967 with his last 45 (with former Shadow's partner Tony Meehan) issued by Decca in early 1963 and one final 45 on his own on the label in early 1964. Fast forward to 1967 and Harris  looked set for a relaunch when he cut this Troggs cover (with musical accompaniment by Tony Meehan) . It out freaks the original by replacing it's minimal music backing by adding some wonky guitar, high pitched flutes, blaring sax and high end brass.  Sadly it failed but gave Jet bragging rights for flying the freakbeat flag higher than anyone else.

2. ADAM FAITH-"Cowman Milk Your Cow" UK Parlophone R 5635 1967
Early 60's idol Adam Faith was one of many performers who hinged their hopes of rebooting their music careers by receiving material from the then hot Bee Gees. Like many of the tunes they gave away this jangly, somber number was never released by the Brothers Gibb.  It's an incredible piece with some raga guitar and solid backing (allegedly by his former backing band The Roulettes) and The Bee Gees on backing vocals and Faith carrying the whole thing very well. It failed to chart and rates as his rarest and most in demand 45.

3. GENE VINCENT-"I Was Born To Be A Rolling Stone" US Challenge 59365 1967
In 1966 has been Gene Vincent was signed to the Challenge label where he cut 3 updated/modern (ie "contemporary") 45's.  "I Was Born To Be A Rolling Stones" is a cracking number delivered on top of a jangly folk rock feel (and and interesting sequence while vibes seamlessly slide in with the 12 string). I have always wondered if the line "I went over to London, lordy what a swinging town but a fast talking phony with a big cigar tried to bring me down" was directed at Don Arden who had fleeced Vincent in the past. Sadly none of his sides for the label revitalized his career but makes for some amazing listening.

4. BILLY J. KRAMER & THE DAKOTAS-"Chinese Girl" UK Reaction 591014 1967
Released as the B-side to Billy J's Bee Gee's cover "The Town Of Tuxley Toymaker", "Chinese Girl" was cut at the end of 1966 with The Dakotas backing him (it was written by Dakotas Mick Green and Robin McDonald). If one overlooks the un-PC lyrics and inane rhymes and concentrates of the musical backing you're in for a ride and indeed this should have been the A-side and left the toytown schlock of the A-side on the bottom where it belonged (it didn't chart anyway).  Interestingly there is an even more way out alternate version with far wilder guitars and stronger vocals on the EMI collection "Do You Want To Know A Secret: The EMI Sessions 1963-1983". 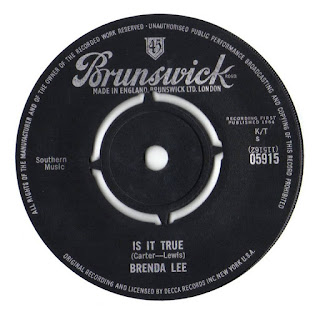 5. BRENDA LEE-"Is It True" UK Brunswick 05915 1964
Like many other American artists Brenda Lee fell on hard times in the wake of the "British Invasion" and was among one of the first American's to go to Britain to record in an effort to jump start their career.  Armed with a Carter/Lewis composition, Mickie Most in the production seat and a host of session players (among them Jimmy Page, who's distinct guitar style is instantly apparent on this track) Lee set about recording in London. "Is It True" is a rollicking number but despite Page's raw guitar pyrotechnics, Vernon's girls backing vocals, Lee's gutsy delivery and a plug on "Ready Steady Go" notwithstanding it only become a modest hit ( #17 in the UK and the US) but failed to restore her to her former glory.

6. BOBBY RYDELL-"When I See That Girl Of Mine" US Capitol 5513 1965
Hats off to Bobby Rydell who attempted to get "with it" and cut and released this Ray Davies track before the Kinks version hit the States in October 1965.  The musical backing is tight and tough (dig the restrained, searing guitar work in the mix) and despite making it a rocking record it did nothing for Bobby or his finished musical career. This year the track was part of the "Kinked: Kink Songs And Sessions 1964-1971" CD compilation featuring covers of Ray and Dave Davies compositions.

7. BILLY FURY-"Silly Boy Blue" UK Parlophone R5681 1968
Billy Fury too joined the ranks of hopefuls who cut a Bee Gees composition in the hopes of some chart action, but it's not his version of "One Minute Woman" on side B we're concerned with but his over the top delivery of David Bowie's "Silly Boy Blue" on the topside. Released 11 months after David's airing on his debut LP, Billy Fury gives it his all and the amazing backing arranged by Alan Tew and produced and directed by future Jam producer Vic Smith add to the weight of this monster, but it hit is was not.

8. DEL SHANNON-"Mind Over Matter" UK Liberty LIB 10277 1967
In February 1967 Stones Svengali and Immediate records boss Andrew Loog Oldham brought Del Shannon over to the UK to cut an entire album at London's Olympic studios with a host of heavy hitters providing the musical backing and Immediate artists Billy Nicholls and Andrew Rose and David Skinner (aka Twice As Much) providing several of the songs. The subsequent long player "Home And Away" was shelved due to lack of funds at Immediate (leaving Shannon understandably enraged) and not released until 1978 as "And The Music Plays On" (in 2006 it was issued with the original title and artwork on CD). However in 1967 two tracks "Mind Over Matter" and "Led Along" from it were issued on a single in the UK (other tracks came out on the US on separate releases in '67 as well). "Mind Over Matter" is an amazing piece of lushly orchestrated pop (with arrangements care of Arthur Greenslade) that's infectious and easily carried along by the stellar production and musical backing. Sadly it did nothing chart wise and rates as the former Charles Westover's most collectible 45.

9. GERRY MARSDEN-"Gilbert Green" UK CBS 2946 1967
Gerry Marsden was yet another U.K. down on their luck artist having a crack at a Brothers Gibb composition in the hopes of relaunching their career through the management of Robert Stigwood (who like Billy J. Kramer was inherited by Stigwood following his merger with Brian Epstein). Though unlike everyone else this cut was previously released by The Bee Gees (two months prior on their LP "Bee Gees 1st"). The musical backing sounds straight off of a Deram/Decca pop psych record and that's what makes this work, but sadly for Gerry Mardsen it didn't stop his one way ticket to cabaret/panto and sank immediately.

10. ROY ORBISON-"There Won't Be Many Coming Home" US MGM  K 13760 1967
From the soundtrack of the odd film "The Fastest Guitar In The West", Roy Orbison took a lot of heat in 1967 when he released this poignant anti-war single with folk rock leanings and orchestral backing on top of a martial military beat. It did not revitalize Roy's career but luckily for him he would only have to wait another two decades for that.