Britain's Honeybus (lead by prolific songwriter Pete Dello) released a slew of 45's in the U.K. and on the European continent but their US discography is slim with just a release of their U.K. hit "I Can't Let Maggie Go" (#8) and today's subject, "Girl Of Independent Means", their final American side issued here in October 1968. Pete Dello had left the band a few months prior being replaced by Jim Kelly (lead vocals/ guitar).  The other members were Ray Cane (bass/vocals and also one of the band's other songwriters), Colin Hare (rhythm guitar) and Pete Kircher (drums).

"Girl Of Independent Means" was the bands fourth U.K. 45 (Deram DM  207 September 1968). It's a great mid tempo pop song. Starting off with a oft copped lick ("I'm A Man")  before injecting some innocuous trumpets preceding the lead vocals.  On the surface it's an incredibly pedestrian tune but it's hooks and top shelf production (care of the band!) make it easy to listen to over and over. Like so many other mid/late 60's U.K. Deram sides no expense is spared in production and the backing music. 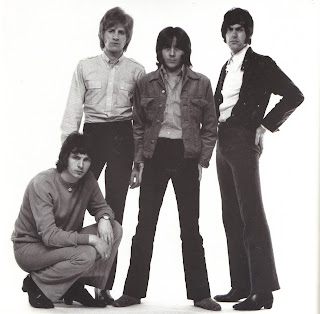 The flip side "How Long" is a jangly soft pop number with some slick harmonies and intricate folk rock guitars giving it a very distinct American "West Coast" feel. Even the guitar solo reminds me of a Buffalo Springfield record and the vocals have me thinking of Moby Grape! Quite out of place in the year of blues rock jams or psychedelic freakouts in Britain.

Both sides are available on Castle's two CD Honeybus anthology "She Flies Like A Bird: The Honeybus Anthology".