The Best Of Sue Records (U.K.)

The U.K. Sue label has long been a favorite of mine. From 1963 until 1968 it served as a UK outlet for a varied discography of US soul, blues r&b and even jazz 45's, many of which were never issued on the U.S. Sue label. In our continuing new tradition of "Top 10's" I've chosen 10 releases on the label that are my favorites. It wasn't an easy task but hopefully I have covered the gamut of this exciting, diverse label. 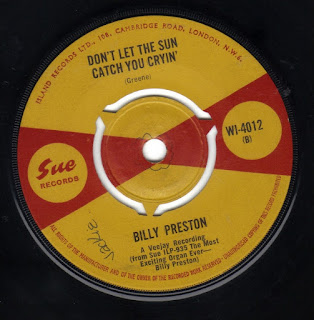 1. BILLY PRESTON-"Don't Let The Sun Catch You Crying" WI 4012 1966
Not to be confused with the Gerry and the Pacemakers number, this monster mellow/moody Hammond B-3 masterpiece is a version of a Louis Jordan track that's hands down my favorite of all the U.K. Sue releases and Billy Preston's finest dripping with soul AND blues through his masterful organ workout. Originally released in the States in 1965 as Vee Jay VJ-653.

2. TONY WASHINGTON AND THE D.C.'s-"Show Me How (To Milk A Cow) WI 327 1964
One of the rarest U.L. Sue 45's is also the label's sole foray into ska territory. Jamaican vocalist Washington cut a host of ska 45's in the U.K. for the likes of Sue, Decca and Black Swan before cutting this one off for Sue. It smacks of cash in (especially the title and lyrics that smacks of a "how to" ska dance tutorial) but it's so well done and damned infectious that I can't help but love it. 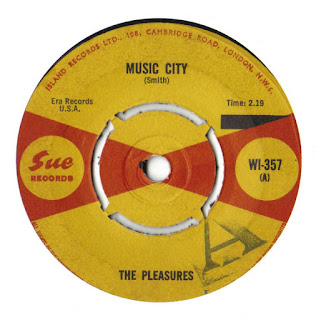 3. THE PLEASURES-"Music City" WI 357 1965
Originally released way back in March 1963 on the Catch label (100), "Music City" is a smooth r&b number with male and female vocals and any tune that mentions a "phonograph booth" is alright by me with several swatches of other "contemporary" hits ("Walk Right In", "Loop De Loop" etc). I have yet to determine if they were the same Pleasures who cut two 45's in the States for the RSVP label in 1964 and 1965. 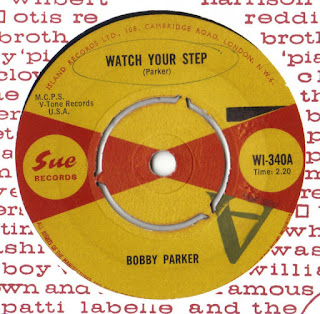 5. BOBBY PARKER-"Watch Your Step" WI 340 1964
Bobby Parker's double sided killer (with "Steal Your Heart Away" on the flip) was first aired in the U.S. on the V-Tone label (223) in July 1961. Both sides were covered by a host of British r&b and beat groups leading one to wonder if it's popularity led to its release in the U.K. or if the large number of artists committing their versions to vinyl led U.K. Sue to capitalize on it by releasing it. "Watch Your Step" is a gritty, raunchy, fast paced r&b cooker that supplied many a U.K. Merseybeat and r&b act a platform. Have a listen and tell me that this had something to do with Steve's Marriott and Winwood's vocal stylings.

6. MR. DYNAMITE-"Sh'mon (Part One)" WI 4027 1967
Long rumored to be James Brown in disguise (something that the folks behind this record did not bother to try to refute allegedly) this record is NOT the Godfather of Soul, though the 100 mph workout and heavy brass certainly have the feel of a J.B. and The Famous Flames disk! My pal Larry Grogan over at Funky 16 Corners tells me that Mr. Dynamite was a gent named Bobbie Howard who was in the U.S. garage band The British Walkers. "Sh'mon" was released on the Soultime label (001) in 1966 back in the States. Both pressings are worth a small fortune. 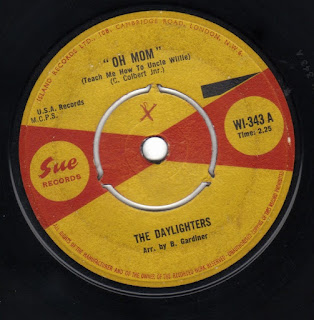 7. THE DAYLIGHTERS-"Oh Mom (Teach Me How To Uncle Willie") WI 343 1964
Without a doubt my favorite U.K. Sue side to DJ is the imminently danceable "Oh Mom (Teach Me How To Uncle Willie)". From it's false start beginning to it's driving drum beat and funky guitar/piano interplay it's a non stop mover.  It was released in the States on Chicago's Tip Top label (2008) in 1964 and was first brought to my attention 30 years ago via Zoot Money and his Big Roll Band.

8. LYDIA MARCELLE-"Another Kind Of Fellow" WI 4025 1966
One of my favorite later soul sides on U.K. Sue was this mid tempo number that I can find no previous U.S. release of (though it's flip "I've Never Been Hurt Like This before" was issued in the States as the flip to her "Everybody Dance" 45 as Atco 45-6366 1966). It's one of the rarer U.K. Sue sides and of course demands a high $$, but regardless it's an infectious tune.

9. ALEXANDER JACKSON & THE TURNKEYS-"The Whip" WI 386 1965
Here's a doozy of a title re-arrange/change! Originally issued in the U.S. as "Flea Pot" by The Lala Wilson Band (Aura 4509 1965) for some reason the artist and the track title got a make over for this U.K. release. Regardless it's probably one of the most rocking instrumentals issued by the label all down to it's sophisticated horns and twangy Steve Cropper styled licks that burst through. Another dance floor sensation that will cost you if you find it.

10. JERRY BUTLER-"Just For You" WI 4009 1966
Tucked away on the flip of the US 45 "Believe In Me" (Vee Jay VJ-707 October 1965) the folks at U.K. Sue made the right choice by flipping the sides and putting this uptempo stormer on the top side. "Just For You" has the perfect ingredients : a great beat, high falsetto backing vocals, subtle horns and some powerful vocals by the Iceman (especially when he starts scatting).