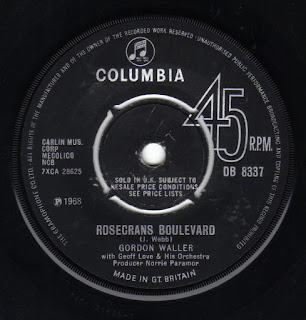 1. GORDON WALLER-"Rosecrans Blvd"
Before breaking off from song partner Peter Asher in 1969 Gordon Waller made the bold step of cutting Jimmy Webb's opus "Rosecrans Blvd" in early 1968 as a 45 for Columbia (it was previously interpreted by The 5th Dimension and Johnny Rivers) full of bombastic key changes, brass and full blown strings. It works incredibly well, but it wasn't a hit. Peter Asher became an A&R man for Apple turning down David Bowie  and Gordon sank into obscurity.

2. BERT JANSCH-"Do You Hear Me Now"
From Bert's debut 1965 LP on Transatlantic comes this powerful number covered by Donovan later in the year.  I've never been a huge fan of Jansch solo stuff but I'm coming around, slowly.

3. ALBERT HAMMOND-"The Air That A Breathe"
The beauty of my Anroak Thing Instagram account is I have met loads of like minded, groovy souls who are constantly giving me a musical education and consistently sending me scurrying to investigate things I haven't heard before, like this Albert Hammond tune made hugely famously by The Hollies. The devil is in the detail here with the simple strings and Beatle-esque feel and the insane part where you think it's going to end and it comes back harder and stomping like Slade doing a "Hey Jude"/"I Am The Walrus" medley. I doff my hat to Twig The Wonder Kid for leading me to the water on this. 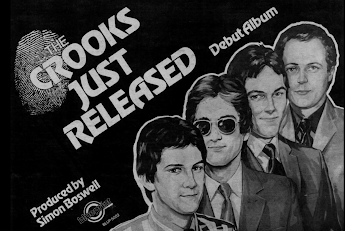 4. THE CROOKS-"Waiting For You"
These oft derided former pub rock '79 mod bandwagon jumpers had a lot going for them. For starters they could actually play their instruments and second they weren't aping the Jam. "Waiting For You" is what Squeeze would have sounded like had they dabbled in plastic reggae drum beats and guitar licks ala The Police. Musos to a man, the deadpan double tracked vocal delivery is pure Difford/Tillbrook and works on top of the cod ska rhythm that plays hide and seek with the reggae roto toms . From their sole LP "Just Released".

5. JOHN MAYALL AND THE BLUES BREAKERS-"On Top Of The World"
Cut in August 1965 for an Immediate records session overseen by Jimmy Page that also produced "I'm Your Witchdoctor", "On Top Of The World" languished in the Immediate vaults after being passed over as single material until a 1968 Immediate blues compilation brought it to light. Taped shortly before Eric Clapton jumped ship for a brief pre-"Bluesbreakers featuring Eric Clapton" Greek expedition, "On Top Of The World" is a fascinating glimpse of Mayall's attempt at toning down the blues and cutting a "pop" record.

6. JOHNNY RIVERS-"Summer Rain"
River's 1967 single later appeared on his highly underrated 1968 LP "Realization", which like Del Shannon, The Four Seasons, Rick Nelson and a host of others left high and dry by the British Invasion and psychedelia has its moments. It's probably the first song to name check "Sgt Pepper's Lonely Heart's Club Band" (complete with a snippet of rocking out ala title cut of the Fab's '67 masterpiece). The LP version is a little longer (hear below) and ends with a tuning up and crowd noise fade out nicked from the Fab's "Sgt. Pepper..." LP intro.

7. ROBYN HITCHCOCK-"Trams Of Old London"
"In the Blitz they never closed though the blew up half the roads, oh it really hurts to see 'em goin' dead in a museum...". Ray Davies had steam trains, Robyn had trams. Two examples of English wit and nostalgia for an England that was long gone. 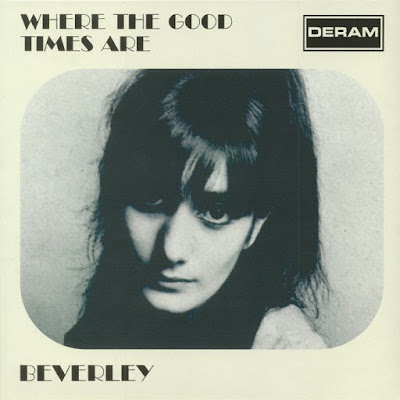 8.  BEVERLEY-"Picking Up The Sunshine"
Bev's solo discography was short, just two 45's on Deram before adding a last name, a husband and a new musical direction. Luckily there were a few tracks in the Deram archives from her brief time there. This unreleased 1967 adaptation of Donovan's "House Of Jansch" was among them. It's one of the highlights of her 2018 RSD LP release "Where The Good Times Are", backed by the likes of Jimmy Page, John Paul Jones, Mike Lease, Alan White etc and easily bests the original thanks to her husky delivery and the stellar musical backing that turns it into a ragtime swinging London '67 swing meets "Sunny Afternoon" thing.

9. POET AND THE ONE MAN BAND-"The Coffee Song"
This brilliantly sublime Tony Colton/Ray Smith ditty was cut by Cream in their first recording session (and not issued until much later), used by Zoot Money on his brilliant 1968 LP "Transition", Dave Berry on his 1968 LP "'68" and by The Shevelles as a mediocre 1968 45. I can't find out much about this version but it features Colton and Smith and along with the Zoot's reading is one of my fave versions of one the number which incidentally is one of my favorite tunes. It's about an aging note card left at a table in a railway cafe by one half of a couple who met by chance years before and are desperately seeking to reconnect. 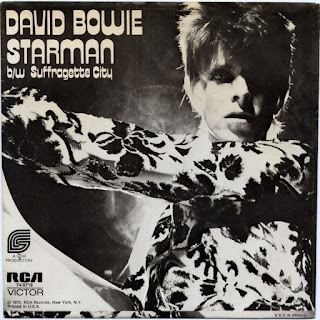 10. DAVID BOWIE-"Suffragette City"
There's a wealth of great tracks on the "Ziggy Stardust" album, but this one always grabs me. It's so well put together with Ronno's slashing guitar, synth hiding in the mix, the "hey man" response, Bowie's cheeky lyrics ("I gotta straighten my face this mellow thighed chick just put my spine outta place", "Hey droogie don't crash here there's only room for one and here she comes here she comes...", "awww wham bam thank you mam") and thumping Stonesy piano. To me it's timeless and nothing short of infectious.

I've only just recently discovered Anorak, and it's great! Thanks for lots of tasteful music.