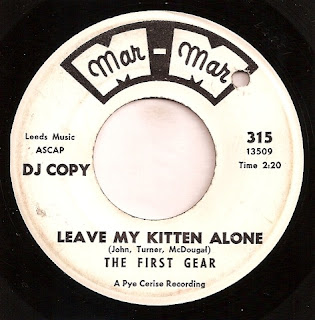 I'm always intrigued by the host of obscure U.K. 60's sides that came out in the United States during the 60's. One of the more interesting ones is today's topic on the Mar Mar label, a short lived off shoot of Chess records who put out a mere three singles. The first was by Ringo Starr's brief stand in for some Euro and Australian dates, Jimmy Nicol and his Shubdubs ("Humpty Dumpty" b/w "Night Train", Mar Mar 313, a US issue of the UK 45 Pye 7N 15623), followed by Aussie's Tommy Adderley with Max Merritt and his Meteors ("I Just Don't Understand" b/w "Whole Lotta Shakin' Going On" Mar Mar 314).  Today's subject was the label's final release launched in October 1964 (issued in Britain at the same time as Pye 7N 15703). Both sides were produced by the legendary Shel Talmy.

"Leave My Kitten Alone" by The First Gear was one of the stand off tracks from Greg Shaw's influential 1980 LP compilation "Pebbles Volume Six: The Roots Of Mod". First cut by Little Willie John in 1959 on King. The First Gear's version was their debut 45, aided in no small part by the nimble fingers of session man Jimmy Page who's distinctive mid 60's guitar style has it's foot prints all of the track. The number is frantic, driven at an insane amphetamine fueled pace accented by Page's tasty over the top guitar solo, the birth of freakbeat! The vocals also have a frantic feel to them like they're a bunch of pilled up/blocked beat freaks!

The actual A-side is a version of "A Certain Girl" (first recorded by Ernie K. Doe in 1961 on the Minit label). It's a rocking affair thanks again in no small part to Jimmy Page's distinctive volume pedal guitar technique but the lead vocals are interesting with some almost frat rock style backing vocals on the call and response.
Both sides have been reissued on a host of compilations over the years ("Freakbeat Freakout", "Doin' The mod Volume Three" etc). "A Certain Girl" was most recently on the Ace records CD comp "Making Time: A Shel Talmy Production".