This label always cracks me up.  It's the eptiome of all of the stupid ploys by not so canny American creeps who cashed in on the "British Invasion".  The Liverpool Sound was a U.S. label and they issued this 45 by a British band who were from Birmingham, not Liverpool and had actually not even made any waves in their home country. I know nothing about the "Liverpool Sound" label but I do know they also released another 45 besides this one by another British group, The Paramounts  (as LS-903V "Poison Ivy"/"Feel Good All Over") who were from Canvey Island!

Mike Sheridan and The Nightriders are famed for their famous lead guitarist Roy Wood.  However this single was cut originally in the U.K. in 1963 (on the day JFK was assassinated according to brumbeat.net) with Roy's predecessor Big Al Johnson providing the lead licks.  The band also featured Mike Sheridan on lead vocals, Big Al Johnson on lead guitar, Dave Pritchard on rhythm guitar, Greg Masters on bass and Roger Spencer on drums.  I have my old chum Mike Sin to thank for turning me onto these guys back in the 80's when Edsel did an LP of all of their stuff.  I used to pretty much buy every LP they did of British 60's bands (The Big 3, The Artwoods, The Merseybeats, The Paramounts, The Roulettes bla bla bla) but somehow this one had slipped by me.  Needless to say I soon trooped down to Midnight Records on 23rd Street in New York and became a Mike Sheridan fan!

"In Love" is a rocking upbeat beat number with a some gritty licks from Johnson and powerful vocals from Mike Sheridan that's easily akin to The Big Three on their more rockin' sides.  The flip side of a semi-lack luster version of The Marvelettes number, nothing horrible there's just nothing really redeemable about it either! It's not as punchy as The Beatles version that's for sure and since theirs was the first version I'd ever heard of the song as a 10 year old on "The Beatles Second Album" (along with a few other Motown covers) it's hard to top the Fab Four for me on this track.  It was actually the A-side and in the U.K. their issue of this was on Columbia DB 7183 but I like the B-side better so I've chosen to display it. 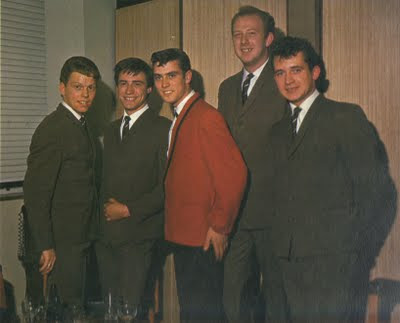 Both sides were issued on the Edsel LP compilation of all of the band's 60's releases  "Birmingham Beat" which for some odd reason (as we've complained in an earlier post), unlike most of the other Edsel LP's, never saw a CD issue.

Read more on Mike Sheridan and the Nightriders on "Anorak Thing" in these posts:

Nice post! One thing, though - the Paramounts were from Southend-on-Sea, not Canvey Island. Although the two places were not far apart, the Paramounts are always identified with Southend and played many gigs there, at the Shades coffee bar and elsewhere. A band who were actually from Canvey Island at the time were the Whirlwinds, who later became Force 5. Later, of course, there was Doctor Feelgood.

I haven't managed to find a copy, but Amazon in the US has offered the Nightriders compilation on CD. It's on the Acadia Records label, a division of Evangeline. Amazon doesn't give the catalog number, but a little snooping about turned up "ACA 8051" and a release date circa September 2003. I'd have to dig out some old Record Collector issues from that year and see if there's a review to confirm if it was released or if copies offered online are just burned from vinyl.

I have noticed that the vinyl was released approximately on the 20th anniversary of their first single and the CD on the 40th anniversary. I hope I don't have to wait for their 60th to get another chance at hearing all of it.

You've got an excellent blog here. My own have stalled; I write just so much about my hobbies, then get sucked back in to them.