Pre-Procol Harum: The Paramounts Part One

This was the debut 45 by The Paramounts, a Southern U.K. bunch of bona fide r&b aficionados
(Gary Broker-Vocals/keyboards, Robin Trower-guitar, Diz Derrick-bass and B.J. Wilson drums)  who we previously discussed in:

It was released in December 1963.  I've chosen to illustrate the flip side instead of the "A" side as I think it's far superior.

Their version of The Coaster's "Poison Ivy" isn't bad (it beat The Stones out on covering it by a month), Brooker's vocals are great as always, it's just that there isn't much else to it.  The "B" side, a cover of The Drifters "I Feel Good All Over" benefits from (once again) Brooker's smooth voice and a nice piano shuffle feel to it (a strong point of the band who were neither the gritty Pretty Things/Stones style r&B nor the mod/jazz of Graham Bond or Georgie Fame).  It's cheery and chirpy and one of my fave Paramounts tracks and like all of their numbers you can actually suss some sort of sense of "passion" for what they're doing. 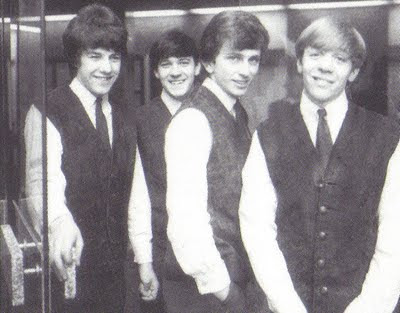 Both sides appear on the essential  Paramounts Edsel LP/CD "Whiter Shades Of R&B".

Hear "I Feel Good All Over":

Email ThisBlogThis!Share to TwitterShare to FacebookShare to Pinterest
Labels: The Paramounts Procol Harum