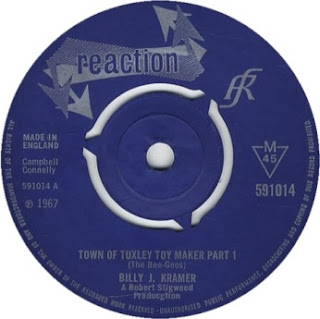 Billy J. Kramer had seen better days by 1967, his previous record,  "Sorry" (Parlophone R 5552), recorded without The Dakotas, was his last before EMI washed their hands of him.  Enter his manager Brian Epstein's new business partner Robert Stigwood and his new label Reaction.  Stigwood's newest charges, an Australian combo called The Bee Gees, were supplying all and sundry (especially those Brit solo singers whose careers were past their expiration date) with new material consisting of tracks unreleased by themselves in the hopes of bolstering the flagging careers of these artists. See our earlier entry on Billy Fury cutting a Gibb brothers track (backed with a tune by another new hopeful, David Bowie):

Billy J. was given a track of theirs called  "The Town Of Tuxley Toymaker Part 1" (a similarly down on his luck Gerry Marsden was given a Brothers Gibb track called "Gilbert Green"  which was released on CBS 2946 in August 1967, as he too had been ushered off EMI).  Sadly for Kramer, Fury or Mardsen the Gibb's Midas touch only worked on their own careers and nobody elses.

"The Town Of Tuxley Toymaker Part 1" is not a terrible record, it was suited for Billy's new supper club/cabaret persona in it's big solo vocal delivery but it's odd and abrupt key changes ratchet up the freakiness quotient during the chorus that breaks up the dreary, slickly produced pap.

The flip side is another horse of another color!  Written by former backing band mates Mick Green and Robin MacDonald, "Chinese Girl" sees Billy J. being backed by The Dakotas for one last time.  Forget the slightly un-P.C. lyrics if you can and focus on how rocking this number is.  Mick Green does his brilliant string chopping in between some raga style licks with a "Train Kept A Rollin'" feel to it all.  No ballad/supper club crap here kids. There is also a superior alternate version titled "Kinky Chinese Girl" that was in the can and available on an exhaustive EMI Billy J. CD compilation ("Do You Want To Know A Secret: The EMI Years 1963-1983") and is also available from iTunes with way out distorted guitars, a new lead vocal track and some serious phlanging that needs to be heard as well. I daresay it's way better than the original.

Kramer had one more excellent record after this in the following year when he cut an excellent version of Harry Nilsson's brilliant "1941" for the NEMS label (56-3396) in March.


"The Town Of Tuxley Toymaker Part 1" can be found on a compilation CD of 60's versions of Bee Gee's compositions called "Maybe Someone Is Digging Underground". "Chinese Girl", as mentioned about can be found in alternate version form on the CD set "Do You Want To Know A Secret: The EMI Years 1963-1983" and in it's original 45 mix form on the A.I.P. CD/L.P. "English Freakbeat Volume 5".

Hear "The Town Of Tuxley Toymaker":